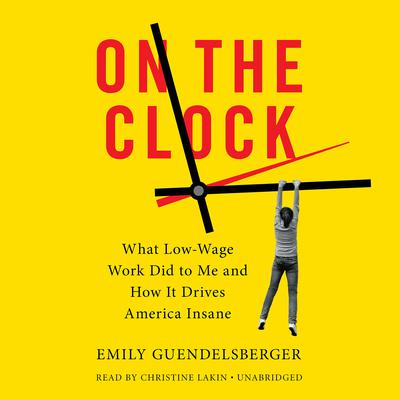 On The Clock: What Low-Wage Work Did to Me and How It Drives America Insane

A Chicago Tribune Pick of 25 Hot Books for Summer

The bitingly funny, eye-opening story of a college-educated young professional who finds work in the automated and time-starved world of hourly labor

After the local newspaper where she worked as a reporter closed, Emily Guendelsberger took a pre-Christmas job at an Amazon fulfillment center outside Louisville, Kentucky. There, the vending machines were stocked with painkillers, and the staff turnover was dizzying. In the new year, she travelled to North Carolina to work at a call center, a place where even bathroom breaks were timed to the second. And finally, Guendelsberger was hired at a San Francisco McDonald's, narrowly escaping revenge-seeking customers who pelted her with condiments.

Across three jobs, and in three different parts of the country, Guendelsberger directly took part in the revolution changing the U.S. workplace. ON THE CLOCK takes us behind the scenes of the fastest-growing segment of the American workforce to understand the future of work in America - and its present. Until robots pack boxes, resolve billing issues, and make fast food, human beings supervised by AI will continue to get the job done. Guendelsberger shows us how workers went from being the most expensive element of production to the cheapest - and how low wage jobs have been remade to serve the ideals of efficiency, at the cost of humanity.

ON THE CLOCK explores the lengths that half of Americans will go to in order to make a living, offering not only a better understanding of the modern workplace, but also surprising solutions to make work more humane for millions of Americans.

“Gives a sense of just how far we are from that [American] dream in On the Clock, a jaunty but dispiriting memoir of her work at three low-rung jobs.” —New Yorker
“The sort of exposé Upton Sinclair would have been proud of.” — Houston Chronicle
"Nickled and Dimed for the Amazon age.” —Salon
“Narrator Christine Lakin gives her voice as much of a workout as jobless journalist Emily Guendelsberger got on the floor of an Amazon center…Lakin brings a sympathetic chuckle to Emily’s self-mocking depiction of confused Amazon temps and reflects Emily’s weariness after exhausting shifts. At a Convergys training session, Lakin deftly juggles the Southern voices and bits of corporate speak, with hilarious results. The way Lakin captures the abruptness, raised voices, and profanity of a call gone wrong at a Convergys call center is as dramatic as it is absurd. Laughter turns out to be the best path to an understanding of life on the low-wage job.” —AudioFile