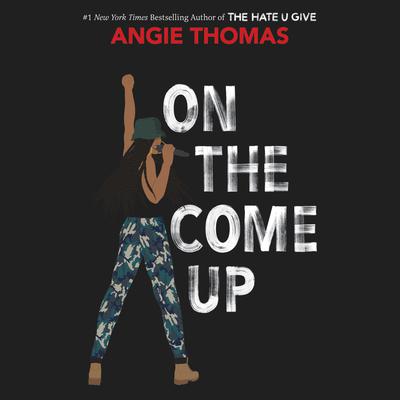 On the Come Up

A #1 Amazon.com bestseller in Teen & YA Homelessness and Poverty Fiction

Don't miss this audiobook, Audible's Young Adult Audiobook of the Year and an Audie Award finalist!

“For all the struggle in this book, Thomas rarely misses a step as a writer. Thomas continues to hold up that mirror with grace and confidence. We are lucky to have her, and lucky to know a girl like Bri.”—The New York Times Book Review

Sixteen-year-old Bri wants to be one of the greatest rappers of all time. Or at least win her first battle. As the daughter of an underground hip hop legend who died right before he hit big, Bri’s got massive shoes to fill.

But it’s hard to get your come up when you’re labeled a hoodlum at school, and your fridge at home is empty after your mom loses her job. So Bri pours her anger and frustration into her first song, which goes viral . . . for all the wrong reasons.

Bri soon finds herself at the center of a controversy, portrayed by the media as more menace than MC. But with an eviction notice staring her family down, Bri doesn’t just want to make it—she has to. Even if it means becoming the very thing the public has made her out to be.

Insightful, unflinching, and full of heart, On the Come Up is an ode to hip hop from one of the most influential literary voices of a generation. It is the story of fighting for your dreams, even as the odds are stacked against you; and about how, especially for young black people, freedom of speech isn’t always free.

"[An] exuberant, exquisitely intimate novel.” —New York Times Book Review
“It’s as gripping and truthful as the [The Hate U Give], packed with politics without being partisan and preachy, and has a fantastic, flawed heroine in Brianna.” —Times (London)
“The text challenges its readers to think deeply about white privilege, police brutality, and the circumstances designed to break the spirits of young people of color.” —Washington Post
“Boasts Thomas’ characteristic ability to handle serious questions of systemic racism with a light and even joyous touch.” —Vox
“This honest and unflinching story of toil, tears, and triumph is a musical love letter.” —Kirkus Reviews (starred review)
“Crackling dialogue, complex characterization, and impactful emotion. Readers already lining up for this title won’t be disappointed.” —Bulletin of the Center for Children’s Books (starred review)
“On the Come Up truly shines in its exploration of Bri’s resilience, determination, and pursuit of her dreams. In this splendid novel, showing many facets of the black identity and the black experience, Thomas gives readers another dynamic protagonist to root for.” — Booklist (starred review)
“Narrator Bahni Turpin becomes The Neighborhood through the eyes of Bri…The spunk in Turpin’s voice brings this roller-coaster story to life…Thomas’ story and Turpin’s narration are raw, funny, and filled with the vulnerable moments that adolescents experience as they develop into who they want to be in this world.” —AudioFile