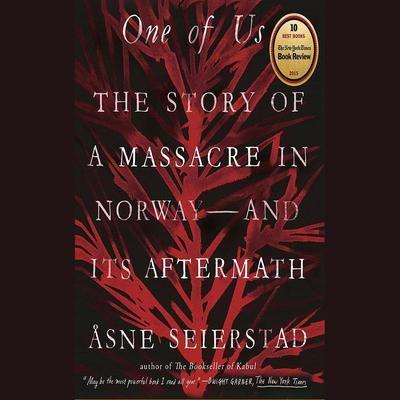 One of Us: The Story of a Massacre in Norway - and Its Aftermath

A BuzzFeed Books Pick of Our Favorite Books of the Decade

A New York Times Book Review Book of the Year

The Guardian (UK) Best Books of the Year selection

A Boston Globe Book of the Year selection

A Men’s Journal Pick of the Year

A harrowing and thorough account of the massacre that upended Norway, and the trial that helped put the country back together.

On July 22, 2011, Anders Behring Breivik detonated a bomb outside government buildings in central Oslo, killing eight people. He then proceeded to a youth camp on the island of Utøya, where he killed 69 more, most of them teenage members of Norway's governing Labour Party. In One of Us, the journalist Åsne Seierstad tells the story of this terrible day and what led up to it. What made Breivik, a gifted child from an affluent neighborhood in Oslo, become a terrorist?

As in her best seller The Bookseller of Kabul, Seierstad excels at the vivid portraiture of lives under stress. She delves deep into Breivik's troubled childhood, showing how a hip-hop and graffiti aficionado became a right-wing activist and Internet game addict, and then an entrepreneur, Freemason, and self-styled master warrior who sought to "save Norway" from the threat of Islam and multiculturalism. She writes with equal intimacy about Breivik's victims, tracing their political awakenings, aspirations to improve their country, and ill-fated journeys to the island. By the time Seierstad reaches Utøya, we know both the killer and those he will kill. We have also gotten to know an entire country - famously peaceful and prosperous, and utterly incapable of protecting its youth.

“The roughly seventy pages Ms. Seierstad devotes to [the attacks] are harrowing in their forensic exactitude…These scenes are balanced by moments of tremendous heroism…The epilogue, about her methods, should be required reading in journalism schools.” —New York Times
This book throws a great deal of light on the life and times of a miserable killer.” —The Guardian (London)
“This is journalism at its very best…Undoubtedly Seierstad’s most powerful narrative to date.” — Sunday Times (London)
"One of Us is a masterpiece of journalism, a deeply painful chronicle of an inexplicable and horrifying attack that we’ll likely never understand…[A] brilliant, unforgettable book.” —NPR

Åsne Seierstad is an award-winning Norwegian journalist and writer known for her work as a war correspondent. She is the author of One of Us, The Bookseller of Kabul, One Hundred and One Days: A Baghdad Journal, and Angel of Grozny: Inside Chechnya. She lives in Oslo, Norway.