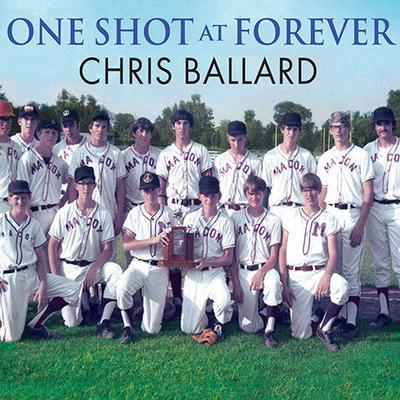 One Shot at Forever: A Small Town, an Unlikely Coach, and a Magical Baseball Season

In 1971, a small-town high school baseball team from rural Illinois playing with hand-me-down uniforms and peace signs on their hats defied convention and the odds. Led by an English teacher with no coaching experience, the Macon Ironmen emerged from a field of three hundred and seventy teams to become the smallest school in Illinois history to make the state final, a distinction that still stands. There, sporting long hair, and warming up to Jesus Christ Superstar, the Ironmen would play a dramatic game against a Chicago powerhouse that would change their lives forever. In a gripping, cinematic narrative, Sports Illustrated writer Chris Ballard tells the story of the team and its coach, Lynn Sweet, a hippie, dreamer and intellectual who arrived in Macon in 1966, bringing progressive ideas to a town stuck in the Eisenhower era. Beloved by students but not administration, Sweet reluctantly took over a rag-tag team, intent on teaching the boys as much about life as baseball. Inspired by Sweet's unconventional methods and led by fiery star Steve Shartzer and spindly curveball artist John Heneberry, the undersized, undermanned Macon Ironmen embarked on an improbable postseason run that infuriated rival coaches and buoyed an entire town. Beginning with Sweet's arrival, Ballard takes listeners on a journey back to the Ironmen's historic season and then on to the present day, returning to the 1971 Ironmen to explore the effect the game had on their lives' trajectories—and the men they've become because of it. Engaging and poignant, One Shot at Forever is a testament to the power of high school sports to shape the lives of those who play them, and it reminds us that there are few bonds more sacred than those among a coach, a team, and a town.

Chris Ballard is a senior writer at Sports Illustrated, where he specializes in narrative long-form stories. He is one of five 2012 finalists for a National Magazine Award in profile writing, is a past recipient of a National Headliner Award, and was the 2011 winner of the Joanie Award. He has also written for the New York Times Magazine and the Los Angeles Times, among other publications, and his work has twice been anthologized in the Best American Sports Writing series. Ballard is the author of The Art of a Beautiful Game, The Butterfly Hunter, and Hoops Nation. He lives in Berkeley with his wife, Alexandra, and two daughters, Callie and Eliza.