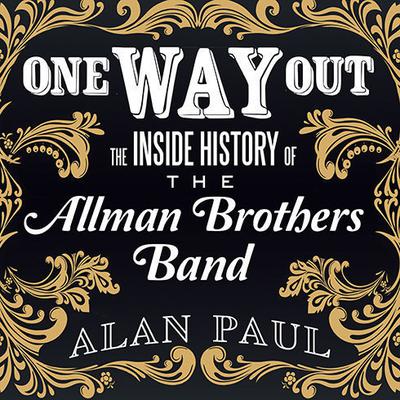 One Way Out: The Inside History of the Allman Brothers Band

One Way Out is the powerful biography of the Allman Brothers Band, an oral history written with the band's participation and filled with original, never-before-published interviews as well as personal letters and correspondence. This is the most in-depth look at a legendary American rock band that has meant so much to so many for so long. For twenty-five years, Alan Paul has covered the Allman Brothers Band, conducting hundreds of interviews, riding the buses with them, attending rehearsals and countless shows. He has interviewed every living band member for this book as well as managers, roadies, and contemporaries, including Gregg Allman, Dickey Betts, Jaimoe, Butch Trucks, Warren Haynes, Derek Trucks, Oteil Burbridge, the late Allen Woody, Jimmy Herring, Eric Clapton, Bob Weir, and many others. Tracking the band's career from their 1969 formation to today, One Way Out is filled with musical and cultural insights, riveting tales of sometimes violent personality conflicts and betrayals, drug and alcohol use, murder allegations and exoneration, tragic early deaths, road stories, and much more, including the most in-depth look at the acrimonious 2000 parting with founding guitarist Dickey Betts and behind-the-scenes information on the recording of At Fillmore East, Layla, Eat a Peach, Brothers and Sisters, and other classic albums.

The author doesn't pull punches, but all involved should find it fair as well as comprehensive. —Kirkus Starred Review

Alan Paul wrote "The Expat Life" column for WSJ.com from 2005 through 2009, and he was named 2008 Online Columnist of the Year by the National Society of Newspaper Columnists. Paul is a senior writer for Slam and Guitar World magazines, and his writing has appeared in The New Yorker, Entertainment Weekly, People, Sports Illustrated, and many other media outlets. He has contributed to The Rolling Stone Jazz and Blues Guide, The Insider's Guide to Beijing, and several other books. He lives with his family in Maplewood, New Jersey.