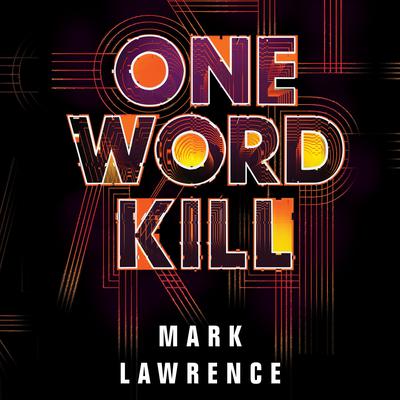 “I enjoyed the hell out of One Word Kill. Mark is an excellent writer.” – George R.R. Martin

In January 1986, fifteen-year-old boy-genius Nick Hayes discovers he’s dying. And it isn’t even the strangest thing to happen to him that week.

Nick and his Dungeons & Dragons-playing friends are used to living in their imaginations. But when a new girl, Mia, joins the group and reality becomes weirder than the fantasy world they visit in their weekly games, none of them are prepared for what comes next. A strange—yet curiously familiar—man is following Nick, with abilities that just shouldn’t exist. And this man bears a cryptic message: Mia’s in grave danger, though she doesn’t know it yet. She needs Nick’s help—now.

He finds himself in a race against time to unravel an impossible mystery and save the girl. And all that stands in his way is a probably terminal disease, a knife-wielding maniac and the laws of physics.

Mark Lawrence is the author of fantasy novels, including the Broken Empire trilogy, the Red Queen’s War trilogy, and the Book of the Ancestor series. He is also a research scientist working on artificial intelligence. He is a dual national with both British and American citizenship, and has held secret-level clearance with both governments.