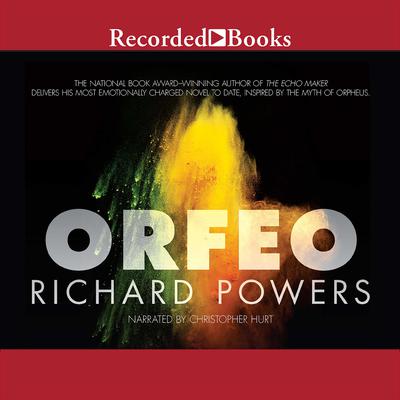 Longlisted for the 2014 Man Booker Prize

In Orfeo, Powers tells the story of a man journeying into his past as he desperately flees the present. Composer Peter Els opens the door one evening to find the police on his doorstep. His home microbiology lab-- the latest experiment in his lifelong attempt to find music in surprising patterns-- has aroused the suspicions of Homeland Security. Panicked by the raid, Els turns fugitive. As an Internet-fueled hysteria erupts, Els-- the " Bioterrorist Bach"-- pays a final visit to the people he loves, those who shaped his musical journey. Through the help of his ex-wife, his daughter, and his longtime collaborator, Els hatches a plan to turn this disastrous collision with the security state into a work of art that will reawaken its audience to the sounds all around them.

“Powers’s talent for translating avant-garde music into engrossing vignettes on the page is inexhaustible. Els’s obsession with avant-garde, which isolates him from everyone he loves, becomes the very thing that aligns him with the reader.” —Publishers Weekly, starred review
“Powers has a way of rendering the world that makes it seem familiar and alien, friendly and frightening. He is sometimes criticized as too cerebral, but when the story’s strands knit fully together in the final act, the effect is heartbreaking and beautiful.” —Booklist, starred review
“The earmarks of the renowned novelist’s work are here…but rarely have his novels been so tightly focused and emotionally compelling.” —Kirkus Reviews, starred review

Richard Powers has published thirteen novels. He is a MacArthur Fellow and received the National Book Award. His book, The Overstory, won the Pulitzer Prize in Fiction.

Richard Powers is the author of a dozen novels, including the New York Times bestseller The Overstory. He is the recipient of a MacArthur Fellowship and the National Book Award, and he has been a finalist for the Pulitzer Prize and a four-time finalist for the National Book Critics Circle Award finalist. He has received a Lannan Literary Award and the James Fenimore Cooper Prize for Historical Fiction. He is a fellow of the Academy of Arts and Letters, and his work has been translated into more than a dozen languages.