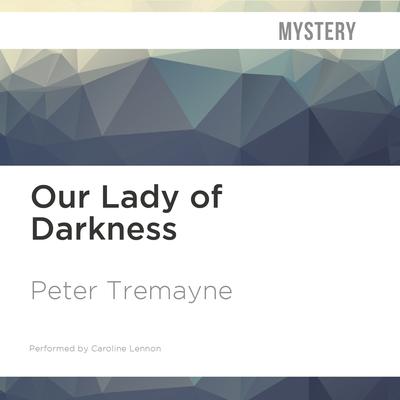 Our Lady of Darkness

In mid-seventh-century Ireland, Sister Fidelma of Cashel-sister to the King of Muman, an advocate of Brehon Courts, and religieuse of the Celtic Church-returns hastily from a pilgrimage to the Shrine of St. James. The news that brings her back is that her companion and friend, the Saxon monk Brother Eadulf, is under arrest for a serious crime in the neighboring kingdom of Laigin. Riding furiously through hostile territory, she arrives only to find out she is too late.

Eadulf has already been tried and found guilty of the murder of a young girl. Even worse, Laigin's king has abandoned the traditional judicial code of Ireland in favor of the ecclesiastical Penitential from Rome—and under this code he is to be executed the following morning. Convinced that her friend is innocent, Fidelma has only twenty-four hours before his execution to come up with evidence persuasive enough to sway the king into allowing an appeal of Eadulf's conviction.

Facing a king determined to make an example of Eadulf and an old adversary of her own, Fidelma soon realizes that nothing is as it was portrayed, and behind the heinous crime is an even more shocking conspiracy. Now, Fidelma must unravel her most perplexing puzzle before time runs out for her closest companion.

Peter Tremayne is a pseudonym of Peter Berresford Ellis, a renowned scholar who has written extensively on the ancient Celts and the Irish. As Tremayne, he is best known for his stories and novels featuring Fidelma of Cashel. He lives in London.