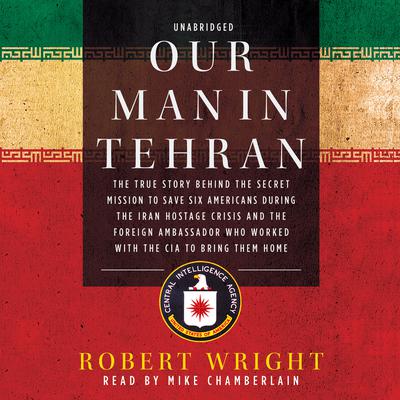 Our Man in Tehran: The True Story behind the Secret Mission to Save Six Americans during the Iran Hostage Crisis and the Foreign Ambassador Who Worked with the CIA to Bring Them Home

The world watched with fear in November 1979, when Iranian students infiltrated and occupied the American embassy in Tehran. The Americans were caught entirely by surprise, and what began as a swift and seemingly short-lived takeover evolved into a crisis that would see fifty-four embassy personnel held hostage, most for 444 days. As Tehran exploded in a fury of revolution, six American diplomats secretly escaped. For three months, Ken Taylor, the Canadian ambassador to Iran—along with his wife and embassy staffers—concealed the Americans in their homes, always with the prospect that the revolutionary government of Ayatollah Khomeini would mete out deadly consequences. The United States found itself handcuffed by a fractured, fundamentalist government it could not understand and had completely underestimated. With limited intelligence resources available on the ground and anti-American sentiment growing, President Carter turned to Taylor to work with the CIA in developing their exfiltration plans. Until now, the true story behind Taylor’s involvement in the escape of the six diplomats and the Eagle Claw commando raid has remained classified.

In Our Man in Tehran, Robert Wright takes us back to a major historical flashpoint and unfolds a story of cloak-and-dagger intrigue that brings a new understanding of the strained relationship between the United States and Iran. With the world once again focused on these two countries, this book is the stuff of John le Carré and Daniel Silva made real.

“In this fascinating account of spycraft and compassion, Wright puts newly unclassified documents to excellent use…An absorbing story of genuine heroism and suspense.” —Publishers Weekly (starred review)
“Wright crafts an informative narrative…[His] spotlight on the courageous Canadian role in hoodwinking the kidnappers will also interest readers of Mark Bowden’s Guests of the Ayatollah.” —Booklist
“Thrilling account of the 1979 Iranian hostage crisis that focuses on the little-known role of Canadian diplomats in protecting Americans…A well-constructed history of a remarkable story, the repercussions of which are still felt today.” —Kirkus Reviews

Robert Wright is the New York Times bestselling author of The Evolution of God, a finalist for the Pulitzer Prize; Nonzero; The Moral Animal; Three Scientists and their Gods, a finalist for the National Book Critics Circle Award; and Why Buddhism Is True. He is the co-founder and editor-in-chief of the widely respected Bloggingheads.tv and MeaningofLife.tv. He has written for the New Yorker, Atlantic, New York Times, Time, Slate, and the New Republic. He has taught at the University of Pennsylvania and at Princeton University, where he also created the popular online course “Buddhism and Modern Psychology.” He is a visiting professor of science and religion at Union Theological Seminary in New York.