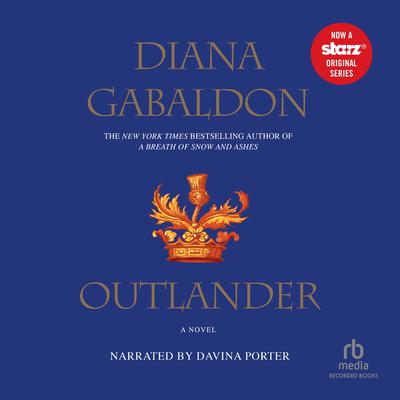 Winner of the 1992 RITA Award for Best Romance Novel

Outlander, Diana Gabaldon's landmark novel of Scottish lore has captured the hearts of millions of readers around the world and catapulted her to the top of the New York Times best-seller list. Intrigue, danger and desire merge in this lush novel of loyalty and time travel. In 1945, Claire Randall, a former combat nurse, is back from the war and reunited with her husband on a second honeymoon. Their blissful reunion is shattered when she touches a boulder in one of the ancient stone ruins and is instantly transported to a Scotland torn by war and raiding border clans . in 1743. Will Claire find her way back to her own time, or is her destiny forever linked with Clan MacKenzie and the gallant James Fraser? Davina Porter's lyrical narration will launch listeners into an exhilarating world of heroism, pulse-pounding adventure, and breathtaking romance as one woman is torn between past and present, passion and love.

“Stunning!…Gabaldon is a born storyteller.” —Los Angeles Daily News
“It is a large canvas that Gabaldon paints, filled with strong passions and derring-do. Strong willed and sensual, Claire is an engaging modern heroine plopped down in a simpler, more primitive time….Great fun…marvelous and fantastic adventures, romance, sex…perfect escape reading.” —San Francisco Chronicle
“Don’t let the number of pages and the Scottish dialect scare you. It’s one of the fastest reads you’ll have in your library…Gabaldon creates characters that you’ll remember.” —Amazon.com
“Gabaldon shows not only a talent with factual detail but also a flair for creating memorable characters and some striking sex scenes.” —Locus
“Highly imaginative and suspenseful…Gabldon’s ambitious first novel gives the reader a well-researched view of eighteenth-century life as seen through the eyes of a twentieth-century woman.” —Ft. Lauderdale Sun-Sentinel
“Marvelously entertaining…A page-turner of the highest order and a good read from start to finish.” —Chattanooga Times
“An old-fashioned page-turner…A mix of history, romance, and adventure.” —Cincinnati Post
“This is escape fiction at its best.” —Booklist (starred review)
“Absorbing and heartwarming, this first novel lavishly evokes the land and lore of Scotland, quickening both with realistic characters and a feisty, likable heroine…Scenes of the Highlanders’ daily life blend poignant emotions with Scottish wit and humor…Claire’s resourcefulness and intelligent sensitivity make the love-conquers-all, happily-ever-after ending seem a just reward.”  —Publishers Weekly
“Though first novelist Gabaldon uses time travel primarily to allow a modern heroine, this is basically a richly textured historical novel with an unusual and compelling love story.” —Library Journal
“Once-in-a-lifetime romantic passion and graphically depicted torture sessions are only the two extremes of this lively time-travel romance set in eighteenth-century Scotland—an imaginative and lighthearted debut by a promising newcomer…A satisfying treat, with extra scoops of excitement and romance that make up for certain lapses in credibility.”  —Kirkus Reviews
“Gabaldon’s genre-crossing classic of romance, fantasy, and historical fiction…achieves a new dimension in the audio format. Davina Porter maintains the distinct voices she creates for each character throughout the lengthy narration. Her delivery of eighteenth-century language sounds authentic and is easily understandable. The hot sex and graphic violence, integral to the story, are far more vivid [in audio] than they are on paper.” —AudioFile