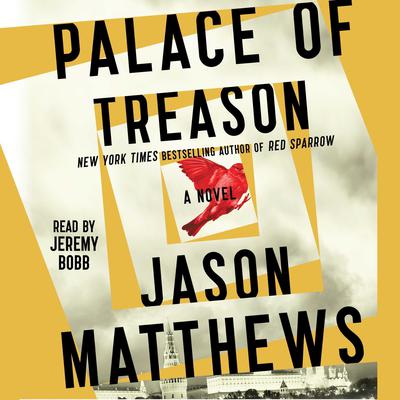 Palace of Treason: A Novel

A 2015 Amazon Best Books of the Year Selection for Mystery, Thriller, & Suspense

Captain Dominika Egorova of the Russian Intelligence Service despises the oligarchs, crooks, and thugs of Putin’s Russia—but what no one knows is that she is also working for the CIA. Her “sparrow” training in the art of sexual espionage further complicates the mortal risks she must take, as does her love for her handler Nate Nash—a shared lust that is as dangerous as treason.

As Dominika expertly dodges exposure, she deals with a murderously psychotic boss, survives an Iranian assassination attempt and attempts to rescue an arrested double agent—and thwart Putin’s threatening flirtations. A grand, wildly entertaining ride through the steel-trap mind of a CIA insider, Palace of Treason is a story “as suspenseful and cinematic as the best spy movies” (The Philadelphia Inquirer)—one that feels fresh and so possible, in fact, that it’s doubtful this novel can ever be published in Russia.

“Thrilling…Matthews, a real-life retired CIA man, deploys words the way a film director uses special effects, expertly intermingling intrigue, action, and exotic locales to produce an intricately plotted, unputdownable tale.” —O, The Oprah Magazine
“Shimmers with authenticity. The villains are richly drawn…the scenes of them on the job are beyond chilling. Whether in Vienna, Moscow, or Washington, Matthews’ scene setting is superb, and he has a fine eye for telling details.” —New York Times Book Review
“As suspenseful and cinematic as the best spy movies around. Matthews knows his tradecraft, and he knows his writing craft, too.” —Philadelphia Inquirer
“On a scale of one to five stars, Palace of Treason is a six. With Palace of Treason, Jason Matthews has resurrected the spy novel from the doldrums of silly car chases, martinis shaken not stirred, and dubious tradecraft to reflect the deadly serious stakes of the new Cold War.” —New York Journal of Books
“Authentic tradecraft, a complex plot that steadily builds tension, and credible heroes and villains on both sides make this a standout.” —Publishers Weekly (starred review)
“Matthews’ characters seem to leap out of the page…Seldom is a sequel as stunning as the original, but this one absolutely triumphs.” —Library Journal (starred review)
“Matthews’…knowledge of the inner workings of that world adds authenticity that other current writers simply can’t approach…[A] must-read for fans of the spy genre.” —Kirkus Reviews (starred review)
“An extraordinarily commanding, acidly relevant, and unrelentingly suspenseful tale of espionage, brutality, and conscience.” —Booklist (starred review)
“Narrator Jeremy Bobb gives this sizzling second thriller by retired CIA agent Jason Matthews the royal treatment it deserves…Bobb is great at everything he does. His precise French and Russian pronunciations are remarkable. His fast-paced narration is dramatic. But there’s more: Matthews provides a recipe at the end of each chapter for a food consumed in that chapter, which Bobb delivers like a master chef. Both the writing and reading make this audio a great listen, and because of the ambiguous ending, listeners will hope for a sequel soon. Winner of the AudioFile Earphones Award.” —AudioFile
“This is stay-up-all-night reading, and we’re pummeled by hair-trigger actions on every page.” —BookPage

Jason Matthews is a retired officer of the CIA’s Operations Directorate. Over a thirty-three-year career, he served in multiple overseas locations and engaged in clandestine collection of national security intelli­gence, specializing in denied-area operations. He conducted recruitment operations against Soviet–East European, East Asian, Middle Eastern, and Caribbean targets. As chief in various CIA stations, he collaborated with foreign partners in counterproliferation and counterterrorism operations.