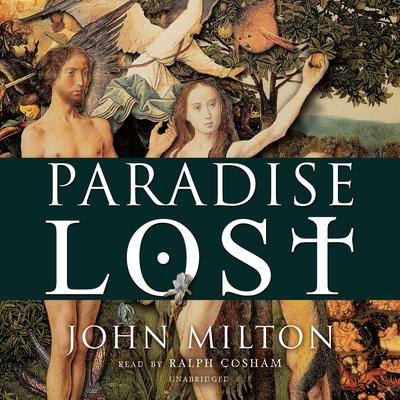 Often considered the greatest epic in any modern language, Paradise Lost tells the story of the revolt of Satan, his banishment from Heaven, and the ensuing fall of Man with his expulsion from Eden. It is a tale of immense drama and excitement, of innocence pitted against corruption, of rebellion and treachery, in which God and Satan fight a bitter battle for control of mankind’s destiny. The struggle ranges across heaven, hell, and earth, as Satan and his band of rebel angels conspire against God. At the center of the conflict are Adam and Eve, motivated by all too human temptations, but whose ultimate downfall is unyielding love.

Written in blank verse of unsurpassed majesty, Paradise Lost is the work of a mastermind involved in a profound search for truth.

“Ralph Cosham’s smooth voice is a fine match for Milton’s blank verse…His choice to read rather than interpret is a wise one. This high-quality production may inspire listeners to further exploration of this significant text.” —AudioFile
“A monumental achievement, both intellectually as a work of the literary imagination and for the powerful expanses of its verse…Inimitable.” —Cambridge Guide to Literature in English
“The greatest single achievement of the seventeenth century…Few poems more deserve, or more repay, prolonged study.” —Oxford Illustrated History of English Literature
“Considered the greatest epic in modern literature.” —Masterpieces of World Literature

John Milton (1608–1674) is considered to be among the most learned of all English poets. After graduating from Cambridge, Milton undertook six years of self-directed study in theology, philosophy, history, politics, literature, and science. He then spent several years writing pamphlets for the Puritan and Parliamentary causes. His incessant labors setting the typeface eventually led to blindness. His masterpiece, Paradise Lost, was composed in memory and dictated to a scribe.