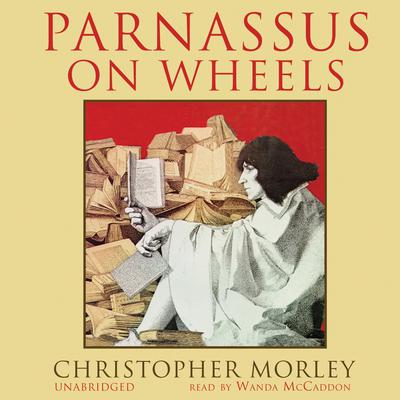 Roger Mifflin is part pixie, part sage, part noble savage, and all God’s creature. With his traveling book wagon named Parnassus, he moves through the New England countryside of 1915 on an itinerant mission of enlightenment. Mifflin’s delight in books and authors is infectious—with his singular philosophy and bright eyes, he comes to represent the heart and soul of the book world. But a certain spirited spinster, disgruntled with her life, may have a hand in changing all that.

This roaring good adventure yarn is spiced with fiery roadside brawls, heroic escapes from death, the most groaning boards in the history of Yankee cookery, and a rare love story—not to mention a glimpse at a feminist perspective from the early 1900s.

“To read Parnassus on Wheels is to be glad there are books in the world. It is graceful in style, light in substance, merry in its attitude toward life, and entertaining in every aspect of its plot and insight into character.” —Boston Evening Transcript
“Nadia May brings a delightful sense of adventure to this light turn-of-the-century tale.” —AudioFile
“[A] most unforcedly charming whimsy.” —Life

Christopher Darlington Morley (1890–1957), American novelist, journalist, poet, and essayist, is the author of more than one hundred novels, books of essays, and volumes of poetry. He was a Rhodes scholar at Oxford, and after returning to America, he was an editor for Ladies’ Home Journal and wrote for the New York Evening Post and other newspapers. He was one of the founders of the Saturday Review of Literature, and as a fan of the Sherlock Holmes stories, he helped to found the the Baker Street Irregulars, a group dedicated to the study of Sir Arthur Conan Doyle’s Sherlock Holmes works. He was also one of the first judges for the Book-of-the-Month Club. He is probably best known for his novel Kitty Foyle, which was an instant bestseller and the basis for an Academy Award-winning movie in 1940, a radio serial, and a television series.