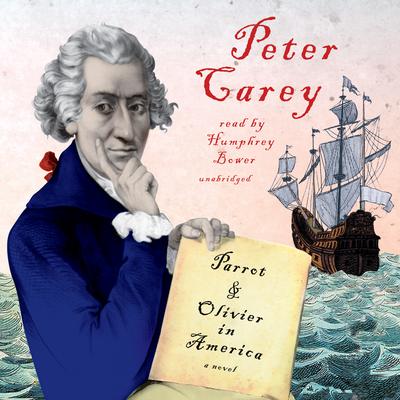 Parrot and Olivier in America

A BookPage Book of the Day, January 2011

One of 2010 Kirkus Reviews’ Best Books for Fiction

Olivier (a fictional variation of Alexis de Tocqueville) is the traumatized child of aristocratic survivors of the French Revolution. Parrot is the motherless son of an itinerant English printer. Born on different sides of history, their lives will be joined by an enigmatic one-armed marquis. When Olivier sets sail for the nascent United States—ostensibly to make a study of the penal system, but more precisely to save his neck from one more revolution—Parrot will be there, too, as spy for the marquis and as protector, foe, and foil for Olivier.

As the narrative shifts between Parrot and Olivier—their adventures in love and politics, prisons and finance, homelands and brave new lands—a most unlikely friendship begins to take hold. And with their story, Peter Carey explores the adventure of American democracy with dazzling inventiveness.

“I finished it with unabated enjoyment…The language is vivid, forceful and poetic…There are terrific set pieces…moments Dickensian in their vividness…It’s a dazzling, entertaining novel.” —Ursula Le Guin, the Guardian
“Parrot and Olivier in America grabs its subject and marches down Main Street playing full out, provoking a reader’s delighted applause…Sentence for sentence, Carey’s writing remains matchlessly robust.” —New York Times
“Gorgeously entertaining and moving…This is a novel of fierce attachments, charting the proximity of beauty and terror in the human soul.” —O, the Oprah Magazine
“Parrot and Olivier in America is a delicious, sprockety contraption, a comic historical picaresque…Like several of Carey’s previous novels, such as Oscar and Lucinda and Jack Maggs, his book has an eighteenth-century robustness, a nineteenth-century lexicon, and a modern liberality…There are few contemporary writers with such a sure sense of narrative pungency and immediacy.” —New Yorker
“Carey braids his story carefully, lovingly…At its heart, Parrot and Olivier in America is a western; the simplest story in history, scuplted down to a twinkle in a philosopher’s eye: Man’s search for freedom.” —Los Angeles Times
“Parrot and Olivier has all the quirky qualities that we have come to expect from Peter Carey: a winding narrative, a mass of vivid historical detail, and some very lively writing…The leading characters are beautifully drawn…[Offers] a gripping portrait of Jacksonian America in all its wild variety, from its model farms to its grungy boarding-houses, from its Fourth of July parades to its filthy streets full of copulating pigs.” —Economist
“Parrot and Olivier in America is such a literary work, even fuller than its predecessors of allusion, contrast and comic contradiction, that there is always more to find: the more you bring to it, the more rewarding its insinuations, its unpredictable switches between satire, serious reflection, and plain fun. Like Oscar and Lucinda (not to mention Carey’s other works), it demands and repays repeated reading.” —Times Literary Supplement (London)
“Carey’s wonderfully witty and visual prose…springs surprise after surprise on the reader…his version of 1830s America allows him to comment on its modern counterpart: he touches lightly on, among many other things, sub-prime mortgages, an inflated art market and demagogic politicians.” —Independent (UK)
“An energetically intelligent novel…It bristles like a hedgehog with all of Carey’s spiky ideas…There’s enough to snag your imagination on, and to spare.” —Christian Science Monitor
“Carey’s novel is smart, charming and original…[He] finds comedy in unexpected places…Scenes of [Parrot and Olivier] with their respective love interests are realistic and poignant, and Carey…writes about America with a deeply felt but unsentimental sense of affection.” —NPR.org
“Carey’s fictionalization of Alexis de Tocqueville’s trip to America that inspired Tocqueville’s study Democracy in America makes for lively listening…Humphrey Bower dexterously juggles American, British, and French accents and keeps each characters distinct and multidimensional. He glides Parrot and Olivier’s wild mood and opinion swings and makes romantic passages light and moving.” —Publishers Weekly (audio review)
“Narrator Humphrey Bower perfectly juggles a variety of complex characters and accents in Carey’s historical novel. Olivier-Jean-Baptist de Clarel de Barfleur, a fictionalized version of Alexis de Tocqueville, is sent to America after his involvement in events surrounding Napoleon’s return and the reigns of Louis XVIII and Charles X. Humphrey Bower inhabits Olivier’s friend, the lovable Parrot, a.k.a. John Larrit, an ex-con who becomes Olivier’s servant and a spy for Olivier’s mother. Bower shows extraordinary vocal flexibility, pacing, and sensitivity as the relationship between Olivier and Parrot deepens against the remarkable tableau of undeveloped America and the rough-hewn people who created the greatest nation on earth.” —AudioFile
“Featuring well-developed and multifaceted characters…this book is rife with humorous details and turns of phrase, and the language is sophisticated…Written by a two-time Booker Prize winner, this engaging book will be particularly appreciated by readers interested in early nineteenth-century American history, the French aristocracy, and emerging democracy.” —Library Journal
“Featuring a deliciously twisty plot and a pair of unforgettable leading characters, Peter Carey’s Parrot and Olivier in America is a rip-roaring work of historical fiction…This complex and comedic work has earned Carey much well-deserved acclaim.” —BookPage, Book of the Day, January 2010, and Top Pick for Book Clubs

Peter Carey is the author of ten previous novels and has twice received the Booker Prize. His other honors include the Commonwealth Writers’ Prize and the Miles Franklin Literary Award. Born in Australia, he has lived in New York City for twenty years.