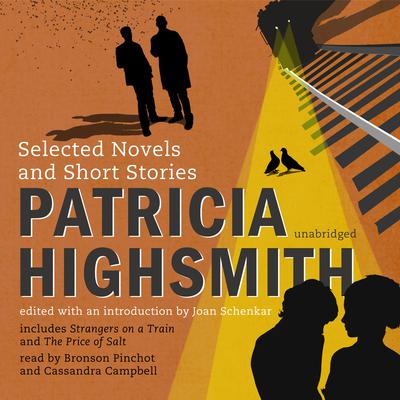 The remarkable renaissance of Patricia Highsmith continues with the publication of Patricia Highsmith: Selected Novels and Short Stories, featuring two groundbreaking novels as well as a trove of penetrating short stories. With a critical introduction by Joan Schenkar, situating Highsmith’s classic works within her own tumultuous life, this book provides a useful guide to some of her most dazzlingly seductive writing. Strangers on a Train, transformed into a legendary film by Alfred Hitchcock, displays Highsmith’s genius for psychological characterization and tortuous suspense, while The Price of Salt, with its lesbian lovers and a creepy PI, provides a thrilling and highly controversial depiction of “the love that dare not speak its name.” Patricia Highsmith: Selected Novels and Short Stories firmly establishes Highsmith’s centrality to American culture by presenting key works that went on to influence a half century of literature and film. Abandoned by the wider reading public in her lifetime, Highsmith finally gets the canonical recognition that is her due.

“Full of strange but credible figures and odd-angle descriptions that still seem fresh…Shadowy characters move in and out of light and darkness as they seek others with whom to share their solitary lives and alarming visions…Highsmith was a formidable artist—as troubling and all-American as that other terror-struck romantic…Edgar Allan Poe.” —Los Angeles Times
“The short stories range in tone from the truly unsettling to the biting. While Highsmith may be best known for The Talented Mr. Ripley, this collection is proof positive that her savagely sedate prose expands far beyond her hero-villain Tom Ripley.” —Publishers Weekly (starred review)
“Mystery writer Patricia Highsmith was known by her fans for her understated yet disturbing prose. In this collection of selected stories and novels…the listener is led down Highsmith’s garden path to encounter wondrously pretty plots flowering as poisonous flytraps. Cassandra Campbell ably disguises what’s coming with affable interpretations of character, while Bronson Pinchot subtly steers each turn of discovery…Both narrators succeed in playing Highsmith’s elegant game, making even the lesser-known stories a masterful garden of delights. Winner of the AudioFile Earphones Award.” —AudioFile
“This anthology of short stories by Highsmith, which additionally includes the novels Strangers on a Train and The Price of Salt, illustrates the author’s incomparable skill at disturbing psychological characterizations and unsettling, at times byzantine suspense. Actor / Audie Award winner Bronson Pinchot’s performance of the male and female voices is flawless, while actress/voice-over artist Cassandra Campbell handles the children’s voices with aplomb. Their clear, distinct, and well-paced performances, combined with this audio’s high production values, make for an excellent listening experience…Highly recommended for students of American literature and those into creepy, suspenseful, Hitchcockian and Koontz-like tales.” —Library Journal (starred audio review)

Patricia Highsmith (1921–1995) was an American author most widely known for her psychological thrillers, which led to more than two dozen film adaptations. She wrote more than twenty novels, including Strangers on a Train, The Price of Salt, and The Talented Mr. Ripley, as well as numerous short stories.