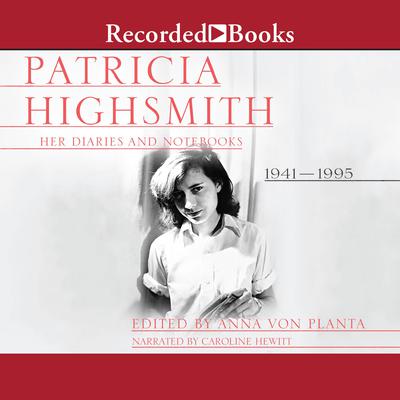 Patricia Highsmith: Her Diaries and Notebooks finally explores the riveting interior world of one of the most prolific and now canonical novelists of the twentieth century.

Relegated to the genre of mystery during her lifetime, Patricia Highsmith is now recognized as one of “our greatest modernist writers” (Gore Vidal). Beloved by fans who were unaware of the real psychological turmoil behind her prose, the famously secretive Highsmith refused to authorize a biography, instead sequestering herself in her Switzerland home in her final years. After Highsmith’s death, her devoted editor Anna von Planta discovered her diaries and notebooks in 1995, tucked in a closet—with tantalizing instructions on how they should be read. For years thereafter, von Planta meticulously culled passages from over eight thousand pages to reveal the inscrutable figure behind the legendary pen. Beginning with her junior year at Barnard in 1941, Highsmith ritualistically kept a diary and notebook—the former to catalog her day, the latter to brainstorm stories and hone her craft. This volume weaves diary and notebook simultaneously, exhibiting precisely how Highsmith’s personal affairs seeped into her fiction—and how the sheer darkness of her imagination played out in her stories.

Charming yet teetering on the egotistical, young “Pat” laid bare her dizzying social life in 1940s Greenwich Village, barhopping with Judy Holliday and Jane Bowles, among others. Alongside Flannery O’Conner and Chester Himes, she attended—at the recommendation of Truman Capote—the Yaddo artist colony in 1948, where she drafted Strangers on a Train. Published in 1950 and soon adapted by Alfred Hitchcock, this debut novel brought recognition and brief financial security, but left a heartsick Highsmith agonizing: “What is the life I choose?”

Providing extraordinary insights into gender and sexuality issues in mid-twentieth-century America, Highsmith’s diaries convey her euphoria writing the lesbian romance The Price of Salt. Yet her sophomore novel would have to be published under a pseudonym, so as not to tarnish her reputation. Indeed, no one could anticipate that a novel depicting love between two women in the McCarthy era would have succeeded commercially.

Seeking relief from America, Highsmith chronicled her peripatetic years in Europe, subsisting virtually on cigarettes and growing more bigoted and satirical with age. After a stay in Positano with a new lover, she reflected in her notebooks on being an expat, and gleefully conjured the unforgettable The Talented Mr. Ripley (1955); it would be this sociopathic antihero who would finally solidify her lasting reputation.

At once lovable, detestable, and mesmerizing, Highsmith put her turbulent life to paper for five decades, acutely aware there must be “a few usable things in literature.” A memoir as significant in our own century as Simone de Beauvoir’s writings were to another time, Patricia Highsmith: Her Diaries and Notebooks is an historic work that illuminates a woman’s rise against the conventional tide to unparalleled cinematic and literary prominence.

Patricia Highsmith (1921–1995) was an American author most widely known for her psychological thrillers, which led to more than two dozen film adaptations. She wrote more than twenty novels, including Strangers on a Train, The Price of Salt, and The Talented Mr. Ripley, as well as numerous short stories.