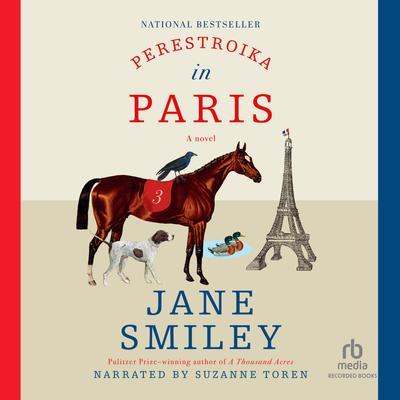 Paras, short for “Perestroika,” is a spirited racehorse at a racetrack west of Paris. One afternoon at dusk, she finds the door of her stall open and—she’s a curious filly—wanders all the way to the City of Light. She’s dazzled and often mystified by the sights, sounds, and smells around her, but she isn’t afraid.

Soon she meets an elegant dog, a German shorthaired pointer named Frida, who knows how to get by without attracting the attention of suspicious Parisians. Paras and Frida coexist for a time in the city’s lush green spaces, nourished by Frida’s strategic trips to the vegetable market. They keep company with two irrepressible ducks and an opinionated raven. But then Paras meets a human boy, Etienne, and discovers a new, otherworldly part of Paris: the ivy-walled house where the boy and his nearly-one-hundred-year-old great-grandmother live in seclusion.

As the cold weather and Christmas near, the unlikeliest of friendships bloom. But how long can a runaway horse stay undiscovered in Paris? How long can a boy keep her hidden and all to himself?

Jane Smiley’s beguiling new novel is itself an adventure that celebrates curiosity, ingenuity, and the desire of all creatures for true love and freedom.

“Suzanne Toren narrates this fable with such subtlety and grace that the listener is effortlessly lulled into the fantastic world of talking and thinking animals. Her portrayals of the characters…are splendid…A marvelous listening experience…Winner of the AudioFile Earphones Award.” —AudioFile
“A remarkable novel that splits the difference between Charlotte’s Web and Animal Farm…It will reward both precocious young readers and their parents with a sense of wonder and whimsy.” —BookPage (starred review)
“A lighthearted spree of a novel.” —Washington Post
“Wholesomely timeless, full of good intentions and happy endings that feel far removed from the problems of the moment.” —Wall Street Journal
“If you’re looking for a feel-good escape, try this.” — New York Times

Jane Smiley is the author of five works of nonfiction and more than twenty acclaimed works of fiction, including A Thousand Acres, which won the Pulitzer Prize for fiction in 1992. In 2001 she was inducted into the American Academy of Arts and Letters.