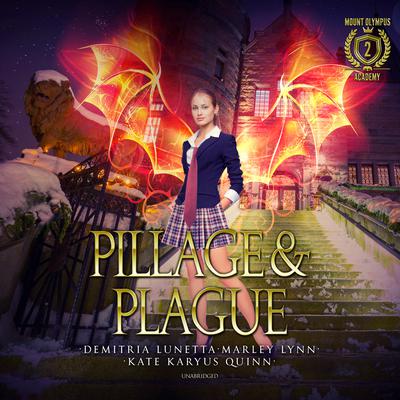 It’s summer term at Mount Olympus Academy, and it’s definitely getting hot in here—even for a dragon-shifter like me.

My best friend is being held by the monsters. My crush, Val, just brought his fiancée back to campus with him. And my first mission was a big fat fail.

But there is a silver lining. His name is Nico, a one-eyed werewolf who’s been tortured by the monsters and has a major alpha thing going on.

His mother, though, is a real piece of work. Maddox Tralano wants more killing, more bloodshed, and less monsters in the world. Her searing, charismatic speeches have MOA students ready to follow her into battle.

The drumbeat of war is growing louder, and soon everyone will be forced to fight for their lives. Because when gods and monsters battle it out, there is no middle ground.

Kate Karyus Quinn is an avid reader and menthol lip blam addict with a BFA in theater and an MFA in film and television production. She lives in Buffalo, New York, with her husband, three children, and one enormous dog.

Demitria Lunetta is the author of YA and MG books and loves all things urban fantasy.

Marley Lynn is a lost child of the gods, who waits on the shores of Lake Erie for her parents to bring her home.