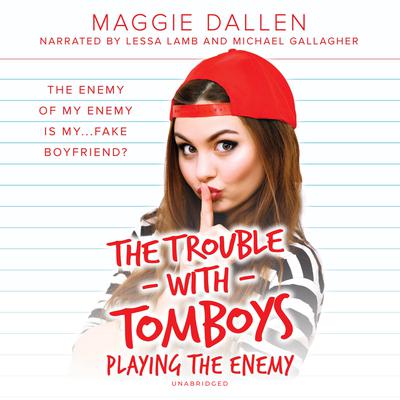 By Maggie Dallen
Read by Lessa Lamb  and Michael Gallagher

The Trouble with Tomboys Series: Book 1

Hannah’s ex has some nerve. First he breaks up with her in a text, and now he thinks he can take soccer away from her? Think again. As the captain of their intramural team, her ex might be able to kick her off his team, but he can’t stop her from playing for their rivals.

The enemy of my enemy is my … fake boyfriend?

The fact that her new team captain is her ex’s arch nemesis? Even better. Playing for River’s team on the other side of town is the perfect payback. When her ex sees them together and gets the wrong idea … well, what’s the harm in playing along? Hannah has already learned her lesson about falling for a teammate, and it’s not a mistake she’ll ever make again. Besides, her relationship with River is just for show—a way for them both to get vengeance on her ex. His kisses might muddle her mind, but he’ll never steal her heart … right?

Maggie Dallen is a big-city girl living in Montana. She writes adult and young adult romantic comedies in a range of genres. An unapologetic addict of all things romance, she loves to connect with fellow avid readers on Facebook, Twitter, or at www.MaggieDallen.com.