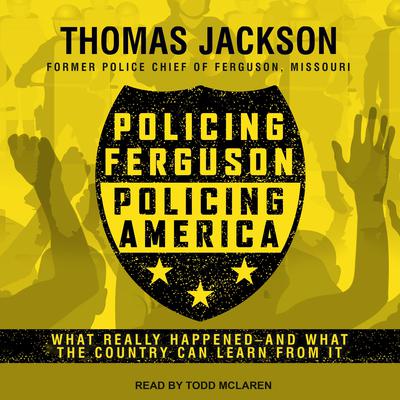 Policing Ferguson, Policing America: What Really Happened . . . and What the Country Can Learn from It

Following the fatal shooting in broad daylight of unarmed African American Michael Brown by a white cop in August 2014, Ferguson, Missouri, became the scene of protests that pitted law enforcement against locals and Black Lives matter activists. The media firestorm has not waned, and, in fact, has grown stronger in light of all the recent violence by and against police officers nationwide. According to Ferguson's former police chief Tom Jackson, the uninformed media actually fans the flames of unrest and exploits the situation: infotainment optics have become more important than truth, while social media spreads the news without providing context. Policing Ferguson, Policing America is the book that finally tells the inside story of what happened in Ferguson, and how good guys became the bad guys through media and political distortion.

Pressure is at a boiling point. In 2016, America has been rocked by heart-wrenching fatal shootings of African Americans by police officers in Louisiana and in Minnesota, and by the shootings of police officers in Dallas, Baton Rouge, and Kansas City that left eleven officers dead and a dozen more wounded. To many Americans, the central theme of this continuing bloody story is one of racial injustice and out-of-control policing.

To understand what happened in Ferguson for real, Policing Ferguson is a must read! —Kevin Jackson, bestselling author, FOX News contributor