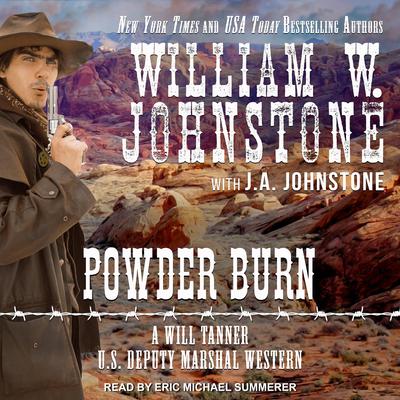 By J. A. Johnstone  and William W. Johnstone
Read by Eric Michael Summerer

The Will Tanner Westerns: Book 3

From America's greatest storytellers comes a bold new chapter in the Will Tanner saga, an epic quest for justice at the crossroads of history—in a crossfire of bullets . . .

U.S. Deputy Marshal Will Tanner earned his badge the old-fashioned way. He shot the bad guys, saved the good guys, and won the fear and respect of everyone in between. That's how legends are born. But when he visits a friend at his ranch and ends up confronting a trigger-happy horse thief, Will earns the wrath of the deadliest, lowlife killers west of the Mississippi. This is how legends die . . .

Turns out Will Tanner is nothing but a moving target on a blood-soaked trail of revenge. From a barroom shootout in Texas, to a Chickasaw showdown in Oklahoma, to a dangerous encounter with a hellion named Hannah, Deputy Marshal Tanner has his hands full, his finger on the trigger—and his life on the line . . .