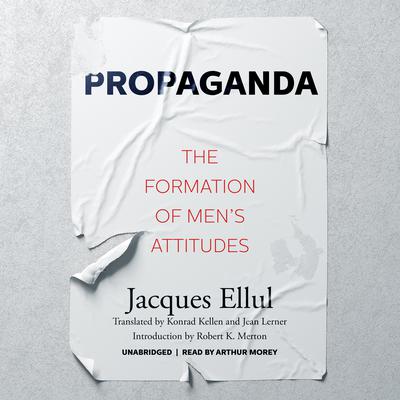 Propaganda: The Formation of Men’s Attitudes

From one of the greatest French philosophers of the twentieth century comes a seminal study and critique of propaganda. Taking not only a psychological approach but a sociological approach as well, Jacques Ellul outlines the taxonomy for propaganda and, ultimately, it’s destructive nature towards democracy.

Drawing from his own experiences fighting for the French resistance against the Vichy regime, Ellul offers a unique insight into the propaganda machine.

“The theme of Propaganda is quite simply…that when our new technology encompasses any culture or society, the result is propaganda…Ellul has made many splendid contributions in this book.” — Marshall McLuhan, Book Week
“A far more frightening work than any of the nightmare novels of George Orwell. With the logic which is the great instrument of French thought, [Ellul] explores and attempts to prove the thesis that propaganda, whether its ends are demonstrably good or bad, is not only destructive to democracy, it is perhaps the most serious threat to humanity operating in the modern world.” —Los Angeles Times

Jacques Ellul (1912–1994) was a French philosopher and Christian anarchist. He served for many years as professor of history and the sociology of institutions at the University of Bordeaux. Although he was trained as a sociologist, he is considered a philosopher with a particular interest in technology and the possibility of technological tyranny. He is said to have coined the phrase “Think globally, act locally.” Among his books are Propaganda, The Political Illusion, The Theological Foundation of Law, The Meaning of the City, and many others.