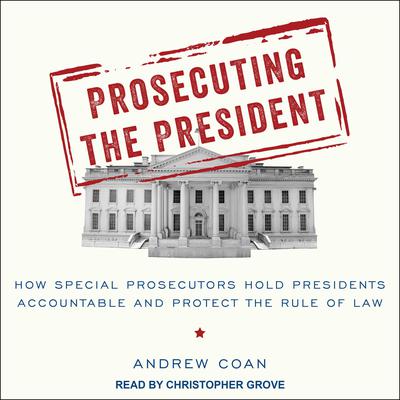 Prosecuting the President: How Special Prosecutors Hold Presidents Accountable and Protect the Rule of Law

In Prosecuting the President, Andrew Coan offers a highly engaging look at the long, mostly forgotten history of special prosecutors in American politics. For more than a century, special prosecutors have struck fear into the hearts of Presidents, who have the power to fire them at any time. How could this be, Coan asks? And how could the nation entrust such a high responsibility to such subordinate officials? With vivid storytelling and historical examples, Coan demonstrates that special prosecutors can do much to protect the rule of law under the right circumstances.

Many have been thwarted by the formidable challenges of investigating a sitting President and his close associates; a few have abused the powers entrusted to them. But at their best, special prosecutors function as catalysts of democracy, channeling an unfocused popular will to safeguard the rule of law. By raising the visibility of high-level misconduct, they enable the American people to hold the President accountable. Yet, if a President thinks he can fire a special prosecutor without incurring serious political damage, he has the power to do so. Ultimately, Coan concludes, only the American people can decide whether the President is above the law.