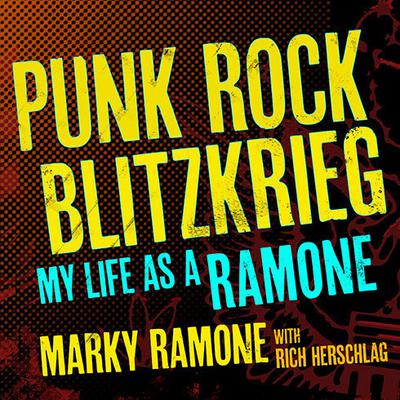 Punk Rock Blitzkrieg: My Life As a Ramone

By Marky Ramone , with Rich Herschlag
Read by Corey Snow

Rolling Stone ranked the Ramones at #26 on its list of the "100 Greatest Artists of All Time." They received a Grammy Lifetime Achievement Award in 2011 and were inducted into the Rock and Roll Hall of Fame in 2002. Marky Ramone played a major part in this success—his "blitzkrieg" style of drumming drove the sound the Ramones pioneered. Now fans can get the inside story. Having outlived his bandmates, Marky is the only person who can share the secrets and stories of the Ramones' improbable rise from obtuse beginnings to induction into the Rock and Roll Hall of Fame. But it wasn't all good times and hit songs, and Marky doesn't shy away from discussing his own struggles. From the cult film Rock 'n' Roll High School through "I Wanna Be Sedated" through his own struggle with alcoholism, Marky Ramone sets the record straight, painting an unflinching picture of the dysfunction behind the band that changed a generation. Punk Rock Blitzkrieg is both a cultural history of punk and a stirring story that millions of fans have been waiting for.

Fans of punk and new wave will be fascinated by [the] details. —Booklist

Marky Ramone, a Brooklyn native, joined the Ramones in 1978 at the age of twenty-two, replacing original drummer Tommy Ramone. This provided the group’s solid rhythm foundation until its retirement in 1996. Most recently he has toured and recorded with his own band, Marky Ramone’s Blitzkrieg. He was honored in 2010 with a drum scholarship in his name by the Musicians Institute in Los Angeles. He is currently in his eighth year as a DJ on SiriusXM Satellite Radio hosting “Marky Ramone’s Punk Rock Blitzkrieg.” He has also appeared on numerous television shows, including The Simpsons and Anthony Bourdain: No Reservations.

Rich Herschlag is the author and coauthor of several books, including Jack of All Trades, The Interceptor, Lay Low and Don’t Make the Big Mistake, and Women are from Manhattan, Men are from Brooklyn. He earned an engineering degree from Princeton University.