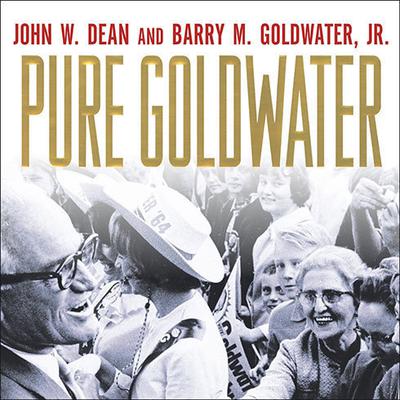 Barry Goldwater was a defining figure in American public life, a firebrand politician associated with an optimistic brand of conservatism. In an era in which American conservatism has lost its way, his legacy is more important than ever. For over fifty years, in those moments when he was away from the political fray, Senator Goldwater kept a private journal, recording his reflections on a rich political and personal life. Here bestselling author John Dean combines analysis with Goldwater's own words. With unprecedented access to his correspondence, interviews, and behind-the-scenes conversations, Dean sheds new light on this political figure. From the late senator's honest thoughts on Richard Nixon to his growing discomfort with the rise of the extreme right, Pure Goldwater offers a revelatory look at an American icon—and also reminds us of a more hopeful alternative to the dispiriting political landscape of today.

An invaluable chronicle of the times. —Publishers Weekly Starred Review
“A sprawling treasure trove…Goldwater is worth rediscovering…Conservatives—and liberals, too—take note.” —Washington Post Book World
“Goldwater’s own words are readable, agree with him or not… entries are thoughtful, informed, even scholarly.” —Baltimore Sun
"Pure Goldwater provides new insights into the man viewed by many as a founding figure in modern American conservatism. There’s plain talk on a range of political issues here, but also personal glimpses…The journal entries about President Richard Nixon and Watergate are particularly eye-opening.” —Palm Springs (CA) Desert Sun
“An invaluable chronicle of the times.” —Publishers Weekly (starred review)
“An engaging memoir…[Goldwater’s writings] include funny, salty remarks that add to the folksy style…The editors show Goldwater’s ultimate success as being remembered as he hoped to be: ‘an honest man who tried his damndest.’ Recommended.” —Library Journal

John W. Dean served as White House counsel for President Richard Nixon from 1970 to 1973. During the Watergate scandal, his Congressional testimony helped lead to Nixon’s resignation. He has written about Watergate in his New York Times bestsellers Blind Ambition and The Nixon Defense: What He Knew and When He Knew It. Among his other books are the national bestsellers Worse Than Watergate and Conservatives without Conscience. He is a regular political and legal commentator on CNN.

Barry M. Goldwater Jr., the son of Senator Barry Goldwater, served as congressman from California for fourteen years. During that time, he served on a number of committees, including the Committee on Science and Technology, the Committee on Public Works and Transportation, and the Joint Committee on Energy. He also served on the privacy commission that looked into privacy issues affecting the private and corporate sectors. Goldwater retired from politics in 1983 and entered business in several major cities in California and New York. Since then, he has held responsible positions involving finance, management, and sales.