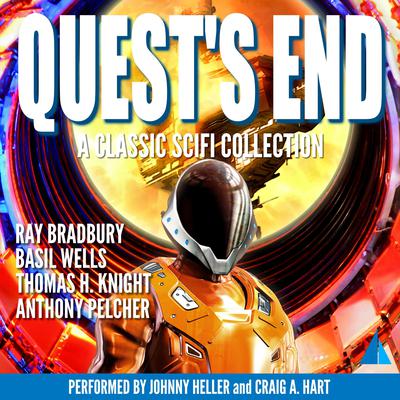 Quest's End: A Classic SciFi Collection is a collection of sci-fi tales from the old pulp magazines of the 1940s and 50s. Heller and Hart bring these five stories vividly to life, taking the listener on incredible journeys beyond the stars and spinning yarns not soon forgotten.

-- In A Little Journey, written by Ray Bradbury, a group of elderly women embark on a final trip to an outer-space paradise.

In Quest's End, by Basil Wells, only the alien Thig can halt Earth's destruction -- with a weapon that was but a thought in his mind.

In Thomas H. Knight's chilling tale, The Man Who Was Dead, a group of men at an old country store on a blustery night encounter a skeleton ... that is alive.

In Anthony Pelcher's story, Vampires of Venus, an entomologist from Earth pits himself against the night-flying vampires that are ravaging the inhabitants of Venus.

In The Monster Maker, Ray Bradbury's second tale in this collection, two men are sent to capture the dread Space Pirate Gunther. But when their ship crashes onto an asteroid, their chances of success--or survival--look grim.