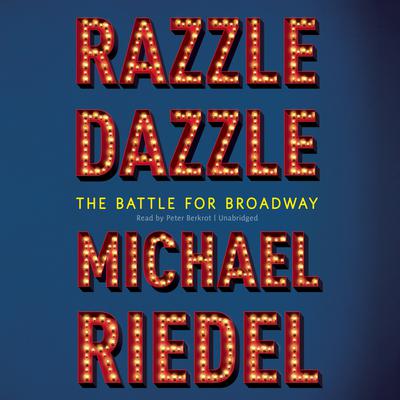 Razzle Dazzle: The Battle for Broadway

A #1 Amazon bestseller in Broadway & Musicals

Razzle Dazzle is a provocative, no-holds-barred narrative account of the people, money, and power that reinvented an iconic quarter of New York City, turning its gritty back alleys and sex shops into the glitzy, dazzling Great White Way—and bringing a crippled New York from the brink of bankruptcy to its glittering glory.

In the 1970s Times Square was the seedy symbol of New York’s economic decline. Its once shining star, the renowned Shubert Organization, was losing theaters to make way for parking lots. Bernard Jacobs and Jerry Schoenfeld, two ambitious board members, saw the crumbling company was ripe for takeover and staged a coup amid corporate intrigue, personal betrayals, and criminal investigations. Once Jacobs and Schoenfeld solidified their power, they turned a collapsed theater-owning holding company into one of the most successful entertainment empires in the world, ultimately backing many of Broadway’s biggest hits, including A Chorus Line, Cats, Les Misérables, Phantom of the Opera, and Mamma Mia! They also sparked the revitalization of Broadway and the renewal of Times Square.

With wit and passion, Michael Riedel tells the stories of the Shubert Organization and the shows that rebuilt a city in grand style, revealing backstage drama that often rivaled what transpired onstage, exposing bitter rivalries, unlikely alliances, and of course, scintillating gossip.

“The personal and professional foibles of various Shuberts are documented with color and wit…For those interested in the business behind the greasepaint, at a riveting time in Broadway’s and New York’s history, this is the ticket.” —USA Today
“[A] lively, immensely enjoyable history of some of the darker days of Broadway and its subsequent revival…features plenty of colorful anecdotes and snappy profiles of central figures from the era.” —New York Times
“Brings this gritty world back to life…Riedel unearths treasure from the recent past and contextualizes events that would otherwise be too easily forgotten.” —Washington Post
“A rollicking, authoritative and valuable history of Broadway…[that] shows off Riedel’s reporting and punchy writing.” —New York Times Book Review
“Fabulously juicy…Riedel’s book grips because he understands, far better than most, the power of the theater owners on Broadway.” —Chicago Tribune
“A vivid page-turner…Startling deaths, unexpected demolitions, backstage gossip, inside stories—it’s every bit as theatrical as its subject matter.” —NPR
“An exhilarating ride…A fascinating, eye-popping view of all the bloody carnage.” —Huffington Post
“One of the best histories of American show business ever published, but one of the great New York City books as well.” —New York Post
“Smart, well-informed, and informative.” —American Theatre
“Riedel brings enthusiasm and authority to this rich, lively debut history…A captivating gift to theater lovers.” —Kirkus Reviews (starred review)
“Firmly taking center stage in this volume are the business people. The resilient Shuberts, who grew their concern from small regional theaters in upstate New York and shepherded it through the advent of talking pictures and the Great Depression, function as the true heroes of the piece.” —Library Journal
“When it comes to Broadway as an institution, as a history, and as a legend, [Riedel is] very much a man in love.” —Booklist
“Peter Berkrot’s narration hits home Riedel’s love of Broadway. Berkrot’s friendly, yet somehow conspiratorial tone gives listeners a front-row seat as Riedel tells stories of transitions, shifting tastes, and new generations, spotlighting successful shows.” —AudioFile
“This book is a love letter to Broadway, both a splendid history of this American institution and a wonderful account of how art gets made.” —Hugh Jackman
“An epic and entertaining study of the stage…A must-read.” —Kevin Spacey
“A fantastically fun book, full of high energy, anecdotes, and wit…Written with love but also a piercing eye, this is one show no one should miss.” —Amanda Foreman, actress
“There have only been a handful of books in history that have come close to accurately depicting the energy and drive that run the business of Broadway. Michael Riedel’s Razzle Dazzle joins that very short list.” —Scott Rudin, producer

Michael Riedel has been a theater columnist for the New York Post since 1998. He worked at the New York Daily News for five years before returning to the Post and has written for the Guardian, Harper’s Bazaar, Mirabella, Departures, and Commentary. He is the executive producer and cohost of Theater Talk on PBS, is a contributor to the BBC, and has appeared on Larry King Live, the Today show, Good Morning America, and many other news programs. Razzle Dazzle is his first book.