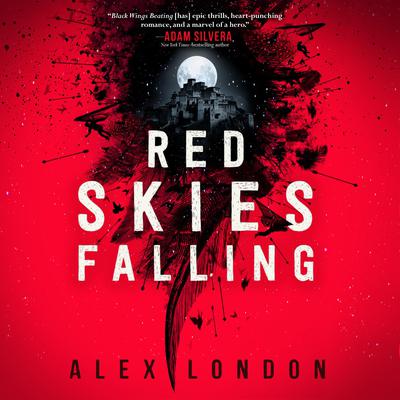 By Alex London
Read by Brittany Pressley  and Michael Crouch

This program includes a bonus conversation with the author.

In Red Skies Falling, Alex London's thrilling sequel to Black Wings Beating, the epic fantasy Skybound Saga continues as twins Kylee and Brysen are separated by the expanse of Uztar, but are preparing for the same war--or so they think.

Kylee is ensconsed in the Sky Castle, training with Mem Uku to master the Hollow Tongue and the Ghost Eagle. But political intrigue abounds and court drama seems to seep through the castle's stones like blood from a broken feather. Meanwhile, Brysen is still in the Six Villages, preparing for an attack by the Kartami. The Villages have become Uztar's first line of defense, and refugees are flooding in from the plains. But their arrival lays bare the villagers' darkest instincts. As Brysen navigates the growing turmoil, he must also grapple with a newfound gift, a burgeoning crush on a mysterious boy, and a shocking betrayal.

The two will meet again on the battlefield, fighting the same war from different sides. But the Ghost Eagle has its own plans.

“Readers clamoring for a YA Game of Thrones will easily fall prey to this trilogy and await the final installment. Arresting.” —Kirkus Reviews (starred review)

Alex London has written books for adults, children, and teens. The first book in the Skybound Saga, Black Wings Beating—which the New York Times Book Review called “brilliantly crafted”—was a NBC Today Show Book Club Pick, a Kirkus Best YA Book of the Year, and received several starred reviews.His young adult debut, Proxy, was an ALA Top Ten Quick Pick for Reluctant Young Readers, a 2014 Best Fiction for Young Adults, a Rainbow List Selection, and appeared on state reading lists across the country. At one time a journalist reporting from conflict zones and refugee camps, Alex lives with his husband in Philadelphia, Pennsylvania.