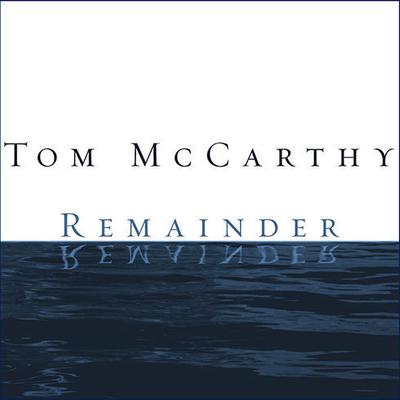 A man is severely injured in a mysterious accident, receives an outrageous sum in legal compensation, and has no idea what to do with it. Then, one night, an ordinary sight sets off a series of bizarre visions he can't quite place. How he goes about bringing his visions to life—and what happens afterward—makes for one of the most riveting, complex, and unusual novels in recent memory.

“What fun it is when a crafty writer plays cat and mouse with your mind, when you can never anticipate his next move and when, in any case, he knows all the exits to the maze and has already blocked them…McCarthy’s superb stylistic control and uncanny imagination transport this novel beyond the borders of science fiction. His bleak humor, hauntingly affectless narrator, and methodical expansion on his theme make Remainder more than an entertaining brain-teaser: it’s a work of novelistic philosophy, as disturbing as it is funny.” —New York Times Book Review
McCarthy's evocation of the narrator's absorption in his fantasy world as it cascades out of control is brilliant. —Publishers Weekly
“The nameless narrator in this eerie debut is a Londoner severely injured in an accident. Months later, he received an £8.5 million settlement on the condition that he never speak about the payout or the incident again—not a problem, since he doesn’t remember it. Our hero then begins to wholly re-create and reenact portions of his old life with a salaried cast of extras, set designers, and stuntmen. In taut and chilly prose, McCarthy describes how this mission becomes a disturbing obsession; the horrifying conclusion is visible thirty pages off, but it’s no less shocking when it arrives.” —Entertainment Weekly
“Hypnotically creepy…McCarthy’s portrait of the pursuit of total control is arresting, and he is alert to the bland amorality that underlies it.” —New Yorker
“Captivating and challenging…Remainder isn’t a mystery novel—there’s no villain here apart from time and space—so if its core ripples with ambiguity, all the better for the reader, as this is a book to be read and then reread, rich as it is with its insights, daring as it is with its contradictions.” —Los Angeles Times
“Addictively strange.” —Details
“Fresh, funny, and deeply disturbing.” —New York magazine
“A chillingly clever novel of patterns that fools you into thinking it’s a novel about plot…[McCarthy] is a new author who’s ambitious and intelligent.” —San Francisco Chronicle

Tom McCarthy is a writer and conceptual artist. He is known in the art world for the reports, manifestos, and media interventions he has made as general secretary of the International Necronautical Society (INS), a semi-fictitious avant-garde network. He is the author of Remainder, Men in Space, and Tintin and the Secret of Literature. McCarthy lives in London.