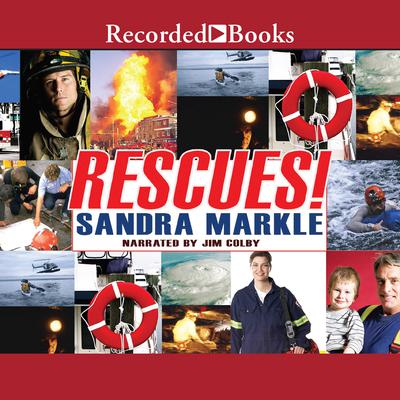 Rescues! tells the stories of 11 people who survived some of the most deadly disasters ever---and of the rescuers who saved their lives. Starting from interviews with both the rescuers and victims before moving on to the science behind each disaster, author Sandra Markle weaves exciting true-life stories filled with a drama and excitement sure to please young readers. "Fiction can't compete with these facts . of unimaginable disaster and unselfish courage."-Booklist, starred review

Sandra Markle is the author of numerous award-winning books for children. A former elementary science teacher, she is a nationally known science education consultant. Markle has received many honors for her series Animal Predators, Animal Scavengers, and Animal Prey. Several titles have been named as National Science Teachers Association/Children’s Book Council Outstanding Science Trade Books for Students K-12, and Animal Predators was honored as a Top 10 Youth Nonfiction Series by Booklist. Her book Rescues! was named a Best Book by the Society of School Librarians International and Animal Heroes was named a 2008 Lasting Connections title by Book Links. Markle lives in New Zealand with her husband, photographer Skip Jeffry.