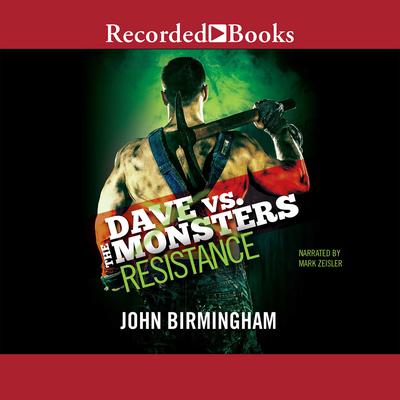 Resistance: Dave vs. the Monsters

Holed up in Las Vegas after the tumultuous Battle of New Orleans, Dave is enjoying the VIP perks afforded a champion monster-slayer. He may be a superhero of swag and the toast of the town, but if some fire-breathing dragons have their way, odds are everyone will soon be toast. As the hordes from the UnderRealms regroup for their next attack, Dave parties with celebrities, lunches with A-listers, and gets his ass lawyered up-because his hellacious ex is looking for a piece of that sweet, sweet action. It's all good, until new monsters roll in, looking to parley with "the Dave." WTF, monsters. Do you think the Dave can't spot a trap before he falls into it? And when things go to hell at warp 10, a suit from a shadow operation swoops in to offer Dave a deal he can't refuse. Now Dave's about to face off against an opponent who makes battling bloodthirsty behemoths look like child's play-a ravishing Russian spy with a few superpowers of her own.

John Birmingham is the author of the Axis of Time trilogy and several other novels and nonfiction titles. His book Leviathan won Australia’s National Prize for Nonfiction in 2002. He has written for the Sydney Morning Herald, Rolling Stone, Penthouse, Playboy, and numerous other magazines. He and his family live in Brisbane, Australia.