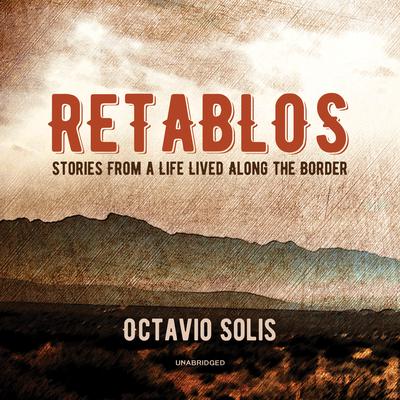 Retablos: Stories from a Life Lived along the Border

A Buzzfeed Best Books of the Year Selection in Nonfiction

Seminal moments, rites of passage, crystalline vignettes—a memoir about growing up brown at the US/Mexico border.

The tradition of retablo painting dates back to the Spanish Conquest in both Mexico and the US Southwest. Humble ex-votos, retablos are usually painted on repurposed metal, and in one small tableau they tell the story of a crisis, and offer thanks for its successful resolution.

In this uniquely framed memoir, playwright Octavio Solis channels his youth in El Paso, Texas. Like traditional retablos, the rituals of childhood and rites of passage are remembered as singular, dramatic events, self-contained episodes with life-changing reverberations.

Living in a home just a mile from the Rio Grande, Octavio is a skinny brown kid on the border, growing up among those who live there, and those passing through on their way north. From the first terrible self-awareness of racism to inspired afternoons playing air trumpet with Herb Alpert, from an innocent game of hide-and-seek to the discovery of a Mexican girl hiding in the cotton fields, Solis reflects on the moments of trauma and transformation that shaped him into a man.

“Tells stories about his childhood and coming of age, including his parents migration to the United States from Mexico, his first encounter with racism, and finding a Mexican migrant girl hiding in the cotton fields.” —New York Times
“Solis’ carefully crafted Retablos [is] an expansive new vision of a troubled America.” —Seattle Times
“The book is rendered in tight, stand-alone recollections rich with poetry and honesty…If retablos are offerings, then Solis’ book is a gift of memory, not always pleasant, but always true.” —Dallas Morning News
“Filtered through veils of distance and time, these scenes and reflections are wonderful and weird flashes of childhood, adolescence and early adulthood in the life of this particular Mexican American boy.” —San Francisco Chronicle
“Solis shares his memories as a brown person on the border with a keen eye and an agile way with words…Solis hones each scene with striking sensual imagery…In all, a beautiful, evocative, and timely expression of border culture for every library collection.” —Booklist

Octavio Solis, the author of fiction and more than twenty plays, is considered one of the most prominent Latino playwrights in America. His works have been produced in theaters across the country, including the Center Group Theatre and the Mark Taper Forum in Los Angeles, South Coast Repertory, the Magic Theatre and the California Shakespeare Theatre in the San Francisco Bay Area, Yale Repertory Theatre, Oregon Shakespeare Festival, Dallas Theater Center, and other venues nationwide. Among his many awards and grants, he has received an NEA Playwriting Fellowship, the Kennedy Center’s Roger L. Stevens Award, the TCG/NEA Theatre Artists in Residence Grant, the National Latino Playwriting Award, the PEN Center USA Award for Drama, and the William Inge Center for the Arts 2019 Distinguished Achievement in the American Theater Award. His fiction and short plays have appeared in the Louisville Review, Zyzzyva, Eleven Eleven, Catamaran, Chicago Quarterly Review, Arroyo Literary Review, and Huizache.