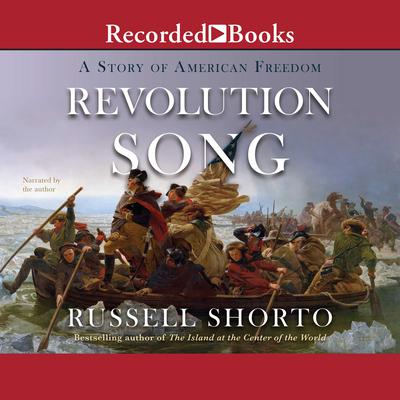 From the author of the acclaimed history The Island at the Center of the World, an intimate new epic of the American Revolution that reinforces its meaning for today. With America's founding principles being debated today as never before, Russell Shorto looks back to the era in which those principles were forged. Drawing on new sources, he weaves the lives of six people into a seamless narrative that casts fresh light on the range of experience in colonial America on the cusp of revolution. While some of the protagonists-a Native American warrior, a British aristocrat, George Washington-play major roles on the field of battle, others-a woman, a slave, and a laborer-struggle no less valiantly to realize freedom for themselves. Through these lives we understand that the Revolution was, indeed, fought over the meaning of individual freedom, a philosophical idea that became a force for violent change. A powerful narrative and a brilliant defense of American values, Revolution Song makes the compelling case that the American Revolution is still being fought today and that its ideals are worth defending.

“Listening to a fine writer who is also an accomplished narrator is one of the unique pleasures of audiobooks…Shorto relies on his listener to make the leap from one character to another, and the underlying effect is symphonic as much as dramatic. This work is an impressive narrative feat sure to appeal to lovers of history, as well as listeners seeking entry into one of the most fascinating eras in American history. Winner of the AudioFile Earphones Award.” —AudioFile
“Shorto has emerged from the archives with a bold, largely neglected cast. He has set them free in a rich, prismatic narrative, as intensely vivid as it is seamlessly constructed.” —Stacy Schiff, New York Times bestselling author
“The intertwined stories of Revolution Song give a sense of how far-reaching a phenomenon the War of Independence was. It leaves to readers the pleasure of judging what each of the figures in the book—or perhaps the combination of them all—contributed to an event that changed the world.” —New York Times Book Review