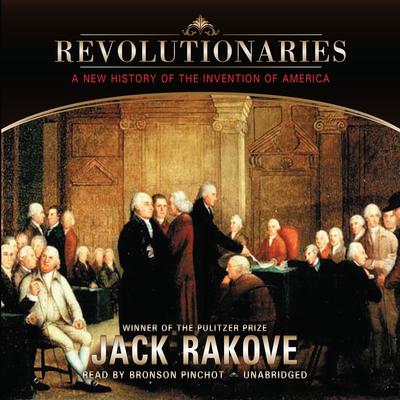 Revolutionaries: A New History of the Invention of America

In the early 1770s, the men who invented America were living quiet, provincial lives in the rustic backwaters of the New World, devoted primarily to family, craft, and the private pursuit of wealth and happiness. None set out to become “revolutionary” by ambition, but when events in Boston escalated, they found themselves thrust into a crisis that moved, in a matter of months, from protest to war.

In this remarkable book, historian Jack Rakove shows how the private lives of these men were suddenly transformed into public careers—how Washington became a strategist, Franklin a pioneering cultural diplomat, Madison a sophisticated constitutional thinker, and Hamilton a brilliant policymaker. Rakove shakes off accepted notions of these men as godlike visionaries, focusing instead on the evolution of their ideas and the crystallizing of their purpose. In Revolutionaries, we see the founders before they were fully formed leaders, as individuals whose lives were radically altered by the explosive events of the mid-1770s. They were ordinary men who became extraordinary—a transformation that finally has the literary treatment it deserves.

Spanning the two crucial decades of the country’s birth, from 1773 to 1792, Revolutionaries uses little-known stories of these famous (and not so famous) men to capture—in a way no single biography ever could—the intensely creative period of the republic’s founding. From the Boston Tea Party to the First Continental Congress, from Trenton to Valley Forge, from the ratification of the Constitution to the disputes that led to our two-party system, Rakove explores the competing views of politics, war, diplomacy, and society that shaped our nation.

Thoughtful, clear-minded, and persuasive, Revolutionaries is a majestic blend of narrative and intellectual history, one of those rare books that makes us think afresh about how the country came to be, and why the idea of America endures.

“In Revolutionaries, Jack Rakove delivers what he promises: a ‘new history of the invention of America.’ Under his deft touch, historical subjects come alive in a series of richly drawn portraits. Deeply researched and elegantly written, this book marks a milestone in the study of America’s revolutionary period. It should not be missed.” —Annette Gordon-Reed, Pulitzer Prize–winning author
“A brilliant account of the Revolution that focuses on the men who led it. Rakove offers the reader a new and fascinating method of combining analytic and narrative history. By using some marvelous vignettes and beautifully crafted portraits of the principal characters as a means of exploring the crucial issues of the Revolutionary era,…he has written a remarkable work of history.” —Gordon S. Wood, Pulitzer Prize–winning author
“Revolutionaries is a serious, probing work of history that boils down a career’s worth of thinking and research.”  —New York Times
“Refreshingly accessible and deeply informed…a richly detailed, heavily documented, but eminently readable account of the men who led the Revolution, wrote the Constitution and persuaded the citizens of the thirteen original states to adopt it…Rakove manages to demystify the leaders of the Revolutionary era even while clarifying the terms on which they continue to deserve our admiration.”  —San Francisco Chronicle
“This superb book is about a few of the men—revolutionaries despite themselves—who helped birth the US and give it political and moral dimension. In keeping with its subtitle, it’s new in being a distinctive, fresh retelling of this epochal tale. Rakove…doesn’t linger over the war for independence. That’s because his eye is on the strands of thought, experience, and vision that led through the Declaration of Independence, diplomacy, state constitutions, and the Constitution of 1787 to the remarkable breakthroughs in thought and intention that marked the nation’s youth. The result is a sparkling, authoritative work…Everyone interested in the founding of the US will want to read this book.” —Publishers Weekly (starred review)
“The author starts with the story of John Adams, a lawyer of modest career goals who became president through his role in the Revolutionary War. His story sets the tone for this retelling of the revolution as Rakove considers Adams’ reluctance to join the political fray. Bronson Pinchot’s reading is low-key but effective in capturing the ideas and personalities of familiar revolutionaries such as George Washington and those lesser known such as John Dickinson. Much of the book may sound familiar; it could serve as a textbook on the American Revolution. However, the emphasis on people, as Rakove discusses issues such as enlisting black soldiers and setting the powers of government, is fresh.” —AudioFile

Jack Rakove, the Coe Professor of History and American Studies and a professor of political science at Stanford University, is one of the most distinguished historians of the early American republic. He won the Pulitzer Prize in history in 1997 for Original Meanings and frequently writes op-ed articles for the New York Times, the Washington Post, and other major newspapers.