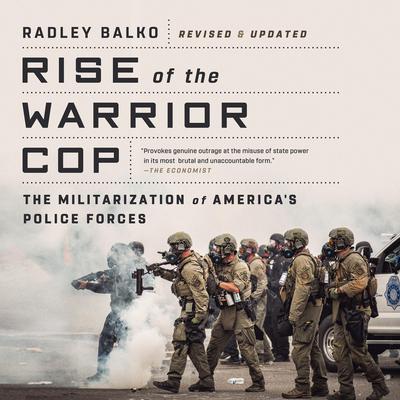 Rise of the Warrior Cop: The Militarization of America's Police Forces

This groundbreaking history of how American police forces have been militarized is now revised and updated. Newly added material brings the story through 2020, including analysis of the Ferguson protests, the Obama and Trump administrations, and the George Floyd protests.

The last days of colonialism taught America’s revolutionaries that soldiers in the streets bring conflict and tyranny. As a result, our country has generally worked to keep the military out of law enforcement. But over the last two centuries, America’s cops have increasingly come to resemble ground troops. The consequences have been dire: the home is no longer a place of sanctuary, the Fourth Amendment has been gutted, and police today have been conditioned to see the citizens they serve as enemies.

In Rise of the Warrior Cop, Balko shows how politicians’ ill-considered policies and relentless declarations of war against vague enemies like crime, drugs, and terror have blurred the distinction between cop and soldier. His fascinating, frightening narrative that spans from America’s earliest days through today shows how a creeping battlefield mentality has isolated and alienated American police officers and put them on a collision course with the values of a free society.

“A detailed history of a dangerous trend.” —Wall Street Journal
“Rise of the Warrior Cop should be on the shelves of every police chief, sheriff, and SWAT commander in the country. A huge contribution.” —Norm Stamper, police chief of Seattle, 1994–2000
“Balko manages to avoid the clichés of both right and left and provokes genuine outrage at the misuse of state power in its most brutal and unaccountable form.” —The Economist (London)
“Balko combines a searing exposé focusing on a specific kind of police brutality with a contextual history of police violence from the Roman Empire through today.” —Kirkus Reviews
“Our country’s ‘founding statesmen were adamant about the dangers of armed, standing forces,’ but Balko argues that we have strayed far from their vision.” —Publishers Weekly
“The best and most comprehensive account of the dangers of police militarization.” —Glenn Greenwald, New York Times bestselling author
“Shows the chilling results of both parties’ unwillingness to stand up to increasingly aggressive police tactics that often pit cops against those they are sworn to protect.” —Arianna Huffington, #1 New York Times bestselling author

Radley Balko reports on criminal justice, the drug war, and civil liberties for the Washington Post. He was previously a writer and investigative reporter at the Huffington Post and a reporter and editor for Reason magazine. He is an author and co-author of two acclaimed nonfiction books. His work has been cited twice by the US Supreme Court and by the Mississippi Supreme Court and two federal appeals courts. He has won the Los Angeles Press Club’s Journalist of the Year award, the NACDL’s Champion of Justice Award, the Innocence Project’s Journalism Award, and the Bastiat Prize for Journalism.