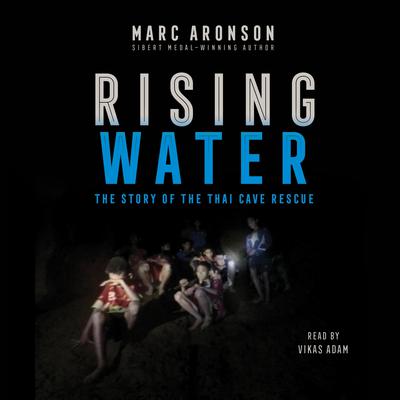 Rising Water: The Story of the Thai Cave Rescue

The incredible true story of the twelve boys trapped with their coach in a flooded cave in Thailand and their inspiring rescue.

On June 23, 2018, twelve members of the Wild Boars soccer team and their coach were exploring the Tham Luang cave complex in northern Thailand when disaster struck. A rainy season downpour flooded the tunnels, trapping them as they took shelter on a shelf of the dark cave. Eight days of searching yielded no signs of life, but on July 2 they were discovered by two British divers. The boys and their coach were eventually rescued in an international operation that took three days. What could have been a terrible tragedy became an amazing story of survival.

Award-winning author Marc Aronson brings us the backstory behind how this astounding rescue took place. Rising Water highlights the creative thinking and technology that made a successful mission possible by examining the physical, environmental, and psychological factors surrounding the rescue. From the brave Thai Navy SEAL who lost his life while placing oxygen tanks along the passageways of the cave, to the British divers that ultimately swam the boys to safety, to the bravery of the boys and their coach, this is the breathtaking rescue that captivated the entire world.

“Despite the concise narration, the gravity of the rescue is never dampened…Solid writing preserves the natural rising suspense and astonishing details of this rescue.” —Kirkus Reviews (starred review)
“Aronson makes the event feel new through his deeply detailed research and his ability to share pertinent information that news organizations may have ignored.” —School Library Journal
“Narrator Vikas Adam recounts a real-life drama that took place in Thailand in 2018…Adam conveys the increasing unlikelihood of rescue as days pass…Adam ably expresses both the tragedy and triumph of the event. Supplemental material—which includes background details, suggestions for further reading, and information about Thailand—offers listeners more on this fascinating story.” —AudioFile

Marc Aronson is an editor and author of many award-winning books for young people, including Master of Deceit: J. Edgar Hoover and America in the Age of Lies and Pick-Up Game, which he coedited with Charles R. Smith Jr.