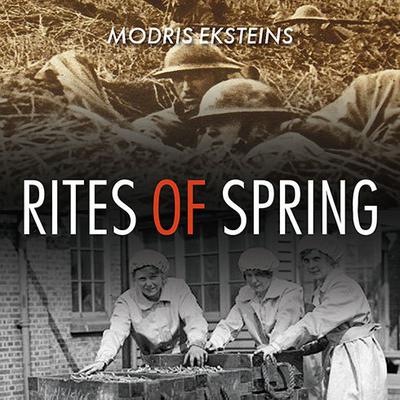 Rites of Spring: The Great War and the Birth of the Modern Age

Dazzling in its originality, Rites of Spring probes the origins, impact, and aftermath of World War I, from the premiere of Stravinsky's ballet The Rite of Spring in 1913 to the death of Hitler in 1945. "The Great War," as Modris Eksteins writes, "was the psychological turning point . . . for modernism as a whole. The urge to create and the urge to destroy had changed places." Eksteins goes on to chart the seismic shifts in human consciousness brought about by this great cataclysm through the lives and words of ordinary people, works of literature, and such events as Lindbergh's transatlantic flight and the publication of the first modern bestseller, All Quiet on the Western Front. Rites of Spring is a remarkable and rare work, a cultural history that redefines the way we look at our past and toward our future.

Modris Eksteins is an award-winning Canadian historian who has written numerous books, including Walking since Daybreak: A Story of Eastern Europe, World War II and the Heart of Our Century, Solar Dance: Genius, Forgery, and the Eclipse of Certainty, and Limits of Reason: The German Democratic Press and the Collapse of Weimar Democracy. He has won many awards, including the Ferguson Prize, the Trillium Book Award, the Pearson Writers’ Trust Non-Fiction Prize, and the 2012 British Columbia’s National Award for Canadian Non-Fiction. Modris is a professor emeritus of history at the University of Toronto Scarborough.