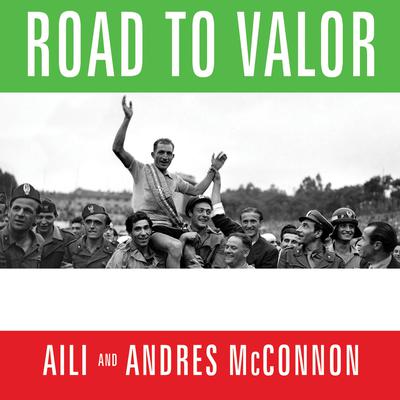 Road to Valor: A True Story of World War II Italy, the Nazis, and the Cyclist Who Inspired a Nation

By Aili McConnon and Andres McConnon
Read by Stephen Hoye

Gino Bartali is best known as an Italian cycling legend: the man who not only won the Tour de France twice, but also holds the record for the longest time span between victories.  During the ten years that separated his hard-won triumphs, his actions, both on and off the racecourse, ensured him a permanent place in Italian hearts and minds. In Road to Valor, Aili and Andres McConnon chronicle Bartali's journey, starting in impoverished rural Tuscany where a scrawny, mischievous boy painstakingly saves his money to buy a bicycle and before long, is racking up wins throughout the country.  At the age of 24, he stuns the world by winning the Tour de France and becomes an international sports icon. But Mussolini's Fascists try to hijack his victory for propaganda purposes, derailing Bartali's career, and as the Nazis occupy Italy, Bartali undertakes secret and dangerous activities to help those being targeted.  He shelters a family of Jews in an apartment he financed with his cycling winnings and is able to smuggle counterfeit identity documents hidden in his bicycle past Fascist and Nazi checkpoints because the soldiers recognize him as a national hero in training. After the grueling wartime years, Bartali fights to rebuild his career as Italy emerges from the rubble.  In 1948, the stakes are raised when midway through the Tour de France, an assassination attempt in Rome sparks nationwide political protests and riots.  Despite numerous setbacks and a legendary snowstorm in the Alps, the chain-smoking, Chianti-loving, 34-year-old underdog comes back and wins the most difficult endurance competition on earth.  Bartali's inspiring performance helps unite his fractured homeland and restore pride and spirit to a country still reeling from war and despair. Set in Italy and France against the turbulent backdrop of an unforgiving sport and threatening politics, Road to Valor is the breathtaking account of one man's unsung heroism and his resilience in the face of adversity.  Based on nearly ten years of research in Italy, France, and Israel, including interviews with Bartali's family, former teammates, a Holocaust survivor Bartali saved, and many others, Road to Valor is the first book ever written about Bartali in English and the only book written in any language to fully explore the scope of Bartali's wartime work.  An epic tale of courage, comeback, and redemption, it is the untold story of one of the greatest athletes of the twentieth century.

A workmanlike biography that fills in some of the gaps of this strange, troubling time. —Kirkus
“You do not have to follow cycling to relish Bartali’s story….Like Laura Hillenbrand’s Seabiscuit before it, Road to Valor is about an unlikely, headstrong champion who transcended his sport to make a deep impact on the broader world.” —Sports Illustrated
“The McConnons have told the story of his [Bartali’s] great and greater victories powerfully and well.” —Boston Globe
“Impeccably researched and thrillingly told…This is truly an amazing tale of a poor Tuscan boy who pedaled his way not only to sports immortality, but into true heroism.” —Globe and Mail
“This thoroughly documented biography is both inspiring and immensely enjoyable.” —Publishers Weekly

Aili McConnon is an award-winning journalist, based in New York. She has written for BusinessWeek, the New York Times, the Wall Street Journal, and Sports Illustrated and has appeared on ABC, CNN, and NPR.

Andres McConnon is a researcher, journalist and award-winning author who has written for various publications including Sports Illustrated, Huffington Post and the National Post.