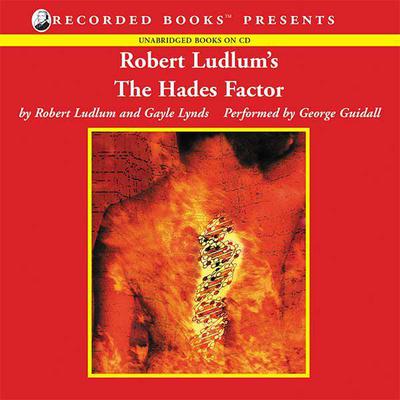 Robert Ludlum's 23 best-selling novels have placed him in the top rank of suspense writers. Over a career spanning 30 years, Ludlum saw his works translated into 32 languages, and there are now more than 210 million copies of his works in print. The Hades Factor, a New York Times best-seller, sets one brave man on a race against the clock to prevent worldwide plague. In three widely spaced locations, three apparently unrelated people die a horrible death. Ravaged by high fever, they succumb to a virus that dissolves their lungs. Local authorities are helpless. After this mysterious disease strikes a researcher at NIH, her fiancee, Lt. Col. Jonathan Smith, vows to find what forces are responsible for her death. Every hour is crucial. From Washington, D.C. to Baghdad, the breathless pace of The Hades Factor never lets up. Once you listen to the opening sentences, you'll be instantly swept up on a suspenseful ride you won't soon forget.

Robert Ludlum (1927–2001) was the author of twenty-five novels, each one a New York Times bestseller. There are more than 210 million of his books in print, and they have been translated into thirty-two languages. His works include The Scarlatti Inheritance, The Chancellor Manuscript, and, perhaps most famously, the Jason Bourne series—The Bourne Identity, The Bourne Supremacy, and The Bourne Ultimatum—among others. The Bourne novels were the basis for three blockbuster films. Born in New York City, Ludlum received a BA from Wesleyan University, and before becoming an author, he was a United States Marine, a theater actor, and a producer.