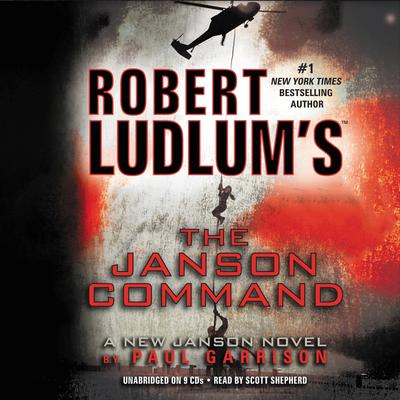 Reformed from his days of covert operations, Paul Janson has set a new mission for himself. Working in partnership with champion sharpshooter Jessica Kincaid, he rehabilitates disenchanted agents and helps them create new lives outside of the violent intelligence sector. These former operatives then form a network of support for Janson when it comes to his other job—Janson also takes on independent assignments. For a fee, he'll use his skills to resolve international crises but only those actions that he believes contribute to the greater good of all.

Whether he's rescuing an American doctor from Somali pirates, attacking militant thugs intent on murdering a West African public servant agitating for human rights, or hunting the moneylenders who capitalize on barbaric civil war, Janson stays honest with three simple rules: no torture, no civilian casualties, and no killing anyone who doesn't try to kill them.

Yet with his commitment to doing what is right while facing canny intelligence operatives, ruthless warlords, deep-sea marauders, or brutal dictators, Janson finds that his most difficult task is figuring out if he's fighting for the good side.

“Paul Garrison makes Robert Ludlum’s world explode with vivid characters and authentic action scenes that keep me wanting to know what happens next.” —David Morrell, New York Times bestselling author of Murder as a Fine Art
“Fast paced and enormously entertaining. Garrison provides the reader with a roller coaster of a story. The Janson Command draws you deep into a world of double-crosses and triple-threats that span the globe. With an operative team like Janson and Kincaid, saving the world was never so exciting.” —Eric Van Lustbader, New York Times bestselling author of Blood Trust
“Garrison has a gift for bringing military operations alive and keeps the tension ratcheted to the last page. Ludlum fans will love this one.’ —Kyle Mills, New York Times bestselling author of The Ares Decision
“Paul Janson’s experiences as a US government assassin left him with deeply unsettling memories. Now determined to act in more altruistic ways, he has teamed up with new partner Jessica Kincaid to save, not squander, innocent lives. Almost from the start though, problems erupt: Their efforts to rescue a physician kidnapped by African pirates goes seriously awry, exposing the pair to a far, far more dangerous situation. The Ludlum franchise moves ahead with deliberate speed.” —BarnesandNoble.com, editorial review
“Robert Ludlum would have been proud of Garrison’s fine thriller that picks up where his The Janson Directive left off...That Janson is a complicated character makes him more interesting than most action heroes, while Kinkaid proves a capable sidekick. A number of swift, unexpected plot twists will leave Ludlum fans eager to see more in this franchise from Garrison.” —Publishers Weekly
“The action moves from Spain to Australia to Switzerland to Israel to Corsica and finally back to Isle de Foree. There’s sufficient knife work, sniper shots, RPGs, private jets, helicopters, betrayals, and corporate machinations to satisfy every armchair covert agent. Formulaic yet entertaining.” —Kirkus Reviews
“The Janson Command has the traditional Robert Ludlum twists and turns, crosses and double-crosses that will appeal to long-time fans.” —Bookreporter.com
“Writer Paul Garrison, who has five excellent nautical thrillers under his name, has seamlessly taken over the Janson franchise, delivering as exciting and as explosive a tale as anything the master ever produced.” —Independent (UK)
“Scott Shepherd delivers a solid reading of the audio edition of Garrison’s latest thriller, this one picking up where the late Robert Ludlum’s The Janson Directive left off…Shepherd’s narration captures the spirit of the prose and effectively translates the author’s lightning-quick action sequences to audio. Additionally, Shepherd—who has narrated thrillers by the likes of James Patterson—transitions between dialogue and violent action smoothly, accelerating his words without losing any articulation, an essential skill for a book of this kind.” —Publishers Weekly (audio review)

Paul Garrison was born in New York and currently lives in Connecticut. Like his grandfather who wandered the South Seas in the last of the square-rigged trading vessels, he spends as much time as he can at sea working with boats, tugs, and ships. He has published five thrillers, mostly sea-oriented, which include Fire and Ice, Red Sky at Morning, Buried at Sea, Sea Hunter, and The Ripple Effect. He is the author of Robert Ludlum’s The Janson Command, a New York Times and USA Today bestseller.