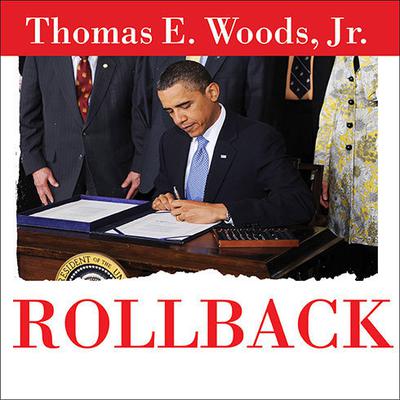 In his blockbuster new book Rollback, New York Times bestselling author Thomas E. Woods, Jr., offers the first critical analysis of the 2010 midterm elections and answers the number-one question on conservatives' minds: How do we roll back the liberal policies and big government programs that Obama/Pelosi/Reid rushed through Congress before the midterms? From getting rid of wasteful and inefficient federal agencies to abolishing the income tax to repealing health care reform and all of Obama's "green" policies, Woods outlines a bold plan for dramatically overhauling the government and restoring our Founding Fathers' vision for America.

“If Congress and the administration really wanted to learn how to eliminate the deficit, limit government, and protect liberty they would stop wasting taxpayers’ money on ‘debt commissions’ and instead read Rollback.” —Ron Paul
“Tom Woods takes an honest (and methodically cited) look at the record of big government: skyrocketing health care costs, an out-of-control military, moral hazard in the markets, and a collapsing dollar. Even better, he offers clever, turn-key solutions that could restore the United States to being the breeding ground of wealth and ingenuity that our immigrant ancestors sought and cherished. Rollback debunks the popular rhetoric of politicians, the media, and academia. Without a hint of partisanship—taking on Republicans and Democrats alike—Woods has shown how misguided policies have set us up to be the first generation in memory to pass along lower standards of health, wealth, and opportunity to our children. If you are confused about how our once-mighty country has fallen so far, so fast, then Rollback is a good place to find your answer.” —Peter Schiff, president of Euro Pacific Capital and host of The Peter Schiff Show
“In Rollback, economic historian Tom Woods proves that the true culprit for our financial woes is a government that thinks it can right any wrong, regulate any activity, and tax any event; and a public that continues to accept the assault on its natural liberties in the name of safety. Woods demonstrates with brutal clarity the critical and immediate need to reject the myth that the government can protect us and to repeal the institutions it has created to do so.” —Judge Andrew P. Napolitano, senior judicial analyst, Fox News
“In Rollback,, Tom Woods provides a provocative assessment of President Obama’s first two years of economic policy-making, challenging virtually every aspect of the administration’s narrative. While some readers may not be persuaded, all will find Woods’ analysis both interesting and worthy of serious debate.” —Dr. Jeffrey Miron, economist, Harvard University, and senior fellow at the Cato Institute

Professor Thomas E. Woods Jr. is the author of the New York Times bestseller The Politically Incorrect Guide to American History, as well as The Church Confronts Modernity: Catholic Intellectuals and the Progressive Era and The Church and the Market: A Catholic Defense of the Free Economy. He holds four Ivy League degrees, including an AB from Harvard and a PhD from Columbia. He teaches courses in Western civilization, is the associate editor of the Latin Mass magazine, and is a prolific essayist on historical subjects. He lives with his family in Coram, New York.