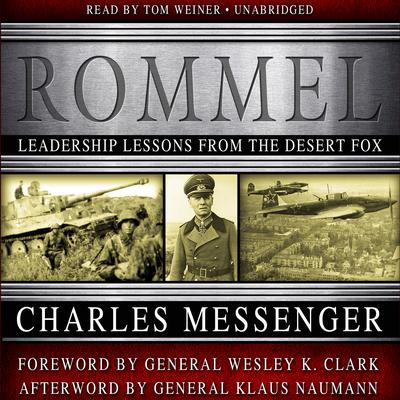 Modeled on the acclaimed Great Generals Series, which features the strategy and legacy of famous American generals, World Generals broadens the scope to include the world’s finest military leaders. Each volume includes a foreword by General Wesley K. Clark and is coedited with an afterword by a different foreign general.

This exciting series opens with “the Desert Fox,” the most famous German field marshal in World War II, Erwin Rommel. A hero of the people of the Third Reich and widely respected by his opponents, Rommel proved himself highly adept at blitzkrieg warfare. Both in France and North Africa he consistently outwitted his adversaries through his ability to sense the weak spot in his enemy’s deployment and by the pace at which he conducted his operations. Rommel was seriously wounded in France just three days before the aborted attempt on Hitler’s life. Rommel subsequently came under suspicion of being involved in the plot and, under pressure, committed suicide. Rommel displayed an outstanding ability to seize the initiative and retain it, and here, Charles Messenger draws on the skills behind this ability for the benefit of modern-day leaders.

“WWII newsreels showed General Erwin Rommel as a dashing commander whose successes in North Africa made him a hero to Germans and earned him the moniker ‘Desert Fox’ among the Allies. Sixty years later, in a style as briskly paced as an armored attack, former Royal Tank Regiment officer Charles Messenger strips away the mythology to deliver the accurate portrait of an ambitious soldier who became Hitler’s favorite general and nemesis of George Patton, explaining why Rommel’s battlefield strategy and tactics should be studied by today’s leaders.” —H. Paul Jeffers, bestselling author of Freemasons
“Charles Messenger tells the story of Germany’s most famous field marshal with a verve and brio reminiscent of his subject. Anyone seeking a concise account of Rommel’s remarkable life and career need look no further.” —Roger Moorhouse, author of Killing Hitler
“A superior compact life of the German field marshal and tank expert, in which narrative and analysis are exceptionally well balanced.” —Booklist

Charles Messenger served for twenty years as an officer in the Royal Tank Regiment before becoming a full-time military historian and defense analyst. He is the author of nearly forty books, including The Blitzkrieg Story. He lives in London.