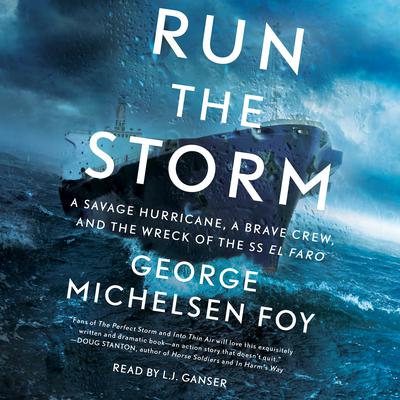 Run the Storm: A Savage Hurricane, a Brave Crew, and the Wreck of the SS El Faro

In the bestselling tradition of The Perfect Storm and The Finest Hours, “an exquisitely written and dramatic book…a literary page-turner” (Doug Stanton, #1 New York Times bestselling author of Horse Soldiers)—the 2015 mysterious disappearance of the SS El Faro, a gigantic American cargo ship that sank in the Bermuda Triangle, taking with it thirty-three lives.

On October 1, 2015, the SS El Faro, a massive American cargo ship disappeared in Hurricane Joaquin, a category 4 storm. The ship, its hundreds of shipping containers, and its entire crew plummeted to the bottom of the ocean, three miles down. It was the greatest seagoing US merchant marine shipping disaster since World War II. The massive ship had a seasoned crew, state-of-the-art navigation equipment, and advance warning of the storm. It seemed incomprehensible that such a ship could sink so suddenly. How, in this day and age, could something like this happen?

Relying on Coast Guard inquest hearings, as well as on numerous interviews, George Michelsen Foy brings us “the most insightful exploration of this unthinkable disaster” (Outside), a story that lasts only a few days, but which grows almost intolerably suspenseful as deep-rooted flaws leading to the disaster inexorably link together and worsen. We see captain, engineers, and crew fight for their lives, and hear their actual words (as recorded on the ship’s black box) while the hurricane relentlessly tightens its noose around the ship. We watch, minute by minute, all that is happening on board—the ship’s mysterious tilt to one side, worried calls to the engine room, ship-to-shore reports, the courage of the men and women as they fight to survive, and the berserk ocean’s savage consumption of the massive hull. And through it all, the pain and ultimate resilience of the families of El Faro’s crew. Now with a new afterword, this “tour de force of nautical expertise” (Ocean Navigator) is a masterwork of stunning power.

“Run the Storm is a dramatic, thrilling adventure story, as well as a cautionary tale…A remarkable book.” —William Geroux, author of The Mathews Men
“Here is the pitch-perfect pairing of subject and author…Run the Storm is a meticulous forensic study that, in Foy’s able hands, rises to the level of literature.” —Hampton Sides, author of In the Kingdom of Ice
“Make no mistake, Foy is a natural story teller…An experienced mariner who clearly knows his stuff.” —John U. Bacon, New York Times bestselling author
“Exquisitely written and dramatic…Foy has an action story that doesn’t quit…A literary page-turner, a joy to read.” —Doug Stanton, #1 New York Times bestselling author

George Michelsen Foy is the author of Finding North: How Navigation Makes Us Human and Zero Decibels: The Quest for Absolute Silence, as well as twelve critically acclaimed novels. He was a recipient of a National Endowment of the Arts fellowship in fiction and his articles, reviews, and stories have been published by Rolling Stone, the Boston Globe, Harper’s, and the New York Times, among others. A former officer on British coastal freighters, he teaches creative writing at NYU, holds a US Coast Guard coastal captain’s license, and divides his time between Cape Cod and New York.