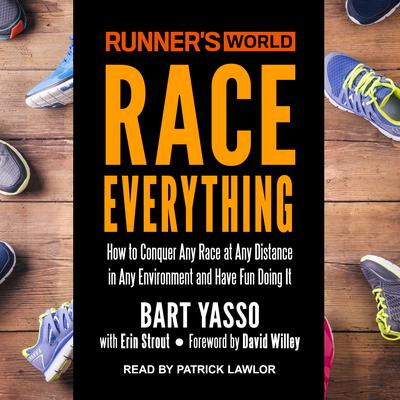 Runner’s World Race Everything: How to Conquer Any Race at Any Distance in Any Environment and Have Fun Doing It

Millions of runners around the country are interested in special experiences, whether it means running a bucket-list event like the world's largest marathon (New York City), or competing in beautiful and challenging locales such as Rome or Death Valley. There is no one better to guide these runners than Bart Yasso. As Chief Running Officer at Runner's World, he's run more than 7,000 races, on all seven continents, at every conceivable distance. Whether it's a 5K or half-marathon, he's done it all, and in Runner's World Race Everything he presents fifty of his favorite races. Yasso shares tips on how he trained, the particularities of each course, and what specific lessons he learned and insights he gleaned about how to run your best in each race.

Bart will teach you how to train and what to do on race day to make the best use of your training. The book will give you everything you need to know to succeed at the most popular race distances, alongside Bart's one-of-a-kind advice on his experiences at popular destination races so you can be inspired to tackle running's signature events. You'll also learn Bart's methods for winning the greatest race of all—longevity—so that you can remain healthy, fit, and able to race for decades to come.

Bart Yasso is Chief Running Officer for Runner’s World and one of the most beloved figures in the sport. Affectionately dubbed the “Mayor of Running,” Bart is the public face of Runner’s World at races in the United States and abroad. Bart has been with Runner’s World since 1987, and created a race sponsorship program that has linked the brand with thousands of races and millions of runners. Bart is also known for creating Yasso 800s, a marathon-predictor workout that has been used by thousands of runners. His memoir, My Life on the Run, is a perennial top seller at the Runner’s World booth (especially when Bart is on hand to sign copies!). He has also contributed to the Runner’s World Big Book of Marathon and Half Marathon Training and Runner’s World Big Book of Running for Beginners. One of the icons of the sport, Bart has been inducted into the Running USA Hall of Champions.