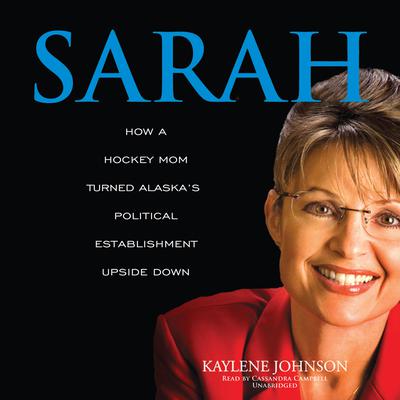 Sarah Palin, a hockey mom and small town mayor, thought her dream of making a difference in the male-dominated realm of Alaska politics was over when she clashed with the state chairman of her Republican Party and went head-to-head with the powerful Republican governor. In 2006, she became a long-shot candidate for governor, demanding a higher ethical standard in state government—and then fate intervened. When a major political scandal rocked Alaska politics, her populist reform message suddenly became front-page news—and when Alaskans began listening to her, they liked what they heard.

“Probably the most popular public official in any state.” —FOX News Network
“She’s proceeding to shatter the traditional political mold.” —USA Today
“Cassandra Campbell’s narration of the now-familiar story of the bold, athletic girl who grew up to balance motherhood and politics is mostly admiring, even when the book touches on controversies Palin has dealt with.” —AudioFile
“Wildly popular, she’s more than just a pretty face.”  —Alaska Magazine

Kaylene Johnson is a writer and long-time Alaskan who makes her home on a small farm outside Wasilla. She enjoys hiking, skiing, and horseback riding in the backcountry. She is married with two sons and two grandsons. Her award-winning articles have appeared in Alaskan Wilderness Discovery Guide, Alaska magazine, the Los Angeles Times, Spirit magazine, and other publications. She received a BA from Vermont College and holds an MFA in writing from Spalding University in Louisville, Kentucky.