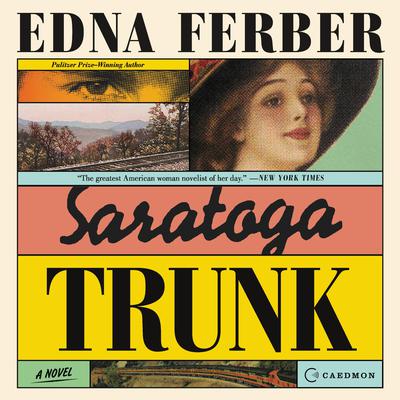 Saratoga Trunk unfolds the story of Clio Dulaine, an ambitious Creole beauty who more than meets her match in Clint Maroon, a handsome Texan with a head for business—and an eye for beautiful young women. Together they do battle with Southern gentry and Eastern society, but in their obsession to acquire all they've ever wanted, they fail to realize they already have all they'll ever need—each other.

A novel by one of the twentieth century's most accomplished and admired writers, Saratoga Trunk is a lively tale of ambition and love that celebrates the triumph of outsiders against the powerful and corrupt.

“Clint and Clio Maroon are among the most vital and engaging figures in Edna Ferber’s long and colorful gallery of heroes and heroines.” —New York Times
“This is a honey, as good entertainment as anything Edna Ferber has done…A colorful and dramatic and original story, —romance and adventure and authentic trappings, well blended.” —Kirkus Reviews (starred review)
“Pulitzer Prize-winning author Edna Ferber’s classic novel set in New Orleans in the 1880s receives a flawless performance by Robin Miles…Miles creates original voices for all the characters and delivers gorgeous descriptions of delicious Creole cuisine and believable scenes, including a train wreck and a shoot-out. Miles is wonderful as she expertly teases out the many well-hidden secrets in this literary gem. Winner of the AudioFile Earphones Award.” —AudioFile

Edna Ferber (1885–1968) was a novelist, short-story writer, and playwright whose work served as the inspiration for numerous Broadway plays and Hollywood films, including Show Boat, Cimarron, Giant, Saratoga Trunk, and Ice Palace. She co-wrote the plays The Royal Family, Dinner at Eight, and Stage Door with George S. Kaufman and was awarded the Pulitzer Prize in 1925 for her novel So Big.