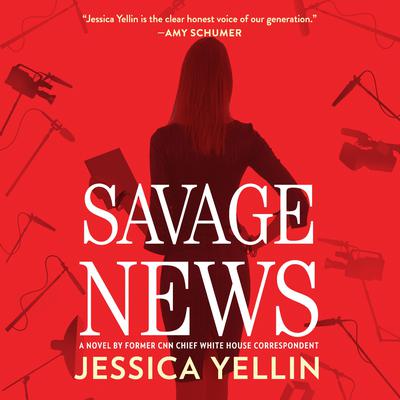 Be noisy. Natalie Savage grew up hearing these words from her beloved father, who admired Walter Cronkite so much he named the family dog after him. Natalie—who spent her twenties missing out on life’s benchmarks—finally sees her efforts pay off when she’s assigned to cover the White House for her network, ATN. The problem? The position is only temporary, a test to see if she has what it takes. She has always relied on her grit, her principles, and her news sense to gain success. But now her competition is a twenty-six-year-old spoiled frat boy who got his big television break by eating raw animal parts on a reality show.

Natalie, along with her scrappy production team, has to navigate ratings wars, workplace sexual harassment, and an international political crisis in order to prove herself. But the closer she gets to achieving her dream job, the more she wonders if it is worth all the compromise.

Timely, funny, and smart, this juicy debut is the perfect tonic for readers contending with today’s politics and the #MeToo movement. Natalie Savage will be sure to join the ranks of our favorite fictional heroines as she figures out that having it all doesn’t mean giving up everything she stands for.

“Jessica Yellin is the clear honest voice of our generation.” —Amy Schumer, praise for the author
“The nuances of current #MeToo issues are on display in this satirically deft, accurately chilling debut with a dollop of romance. Yellin is sure to attract a loyal readership for her next book.” —Library Journal
“Former CNN Chief White House correspondent Yellin skewers the male-dominated world of network news in her feisty debut…Fans of comic heroines like Stephanie Plum will find plenty to like in this sharp and funny satire.” —Publishers Weekly
“A shrewdly written and entertaining novel, with Yellin giving readers a peek behind the curtain of DC politics and reporting. Realities of the #MeToo movement are also woven throughout, making this a timely read. A clever debut.” —Booklist
“Given her experience, Yellin clearly knows where many bodies are buried.” —Page Six
“Jessica is a brilliant journalist who’s never been afraid to call out the absurdities of Washington’s cable news circus. Savage News is an incisive, hilarious, all-too-real look at a media culture that deserves skewering from someone who knows it best.” —Jon Favreau, founder and cohost of Pod Save America

Jessica Yellin is the Emmy and Gracie award winning former Chief White House Correspondent for CNN. She is the founder of SAGE, a Los Angeles based digital media company that will bring news from a female led newsroom. Her first novel, Savage News, will be published by HarperCollins Spring 2019. Yellin has covered Capitol Hill, domestic politics, state and national elections, the culture wars and issues facing women in the workplace. She’s interviewed four living Presidents as well as First Ladies Michelle Obama, Hillary Clinton and Laura Bush. Her work has been published in The New York Times,The Los Angeles Times, The Daily Beast. She serves as a fellow at the USC Annenberg Center on Communication Leadership and Policy and sits on the board of the Center for Public Integrity. She is a graduate of Harvard University and the Westlake school for Girls in Los Angeles, California.