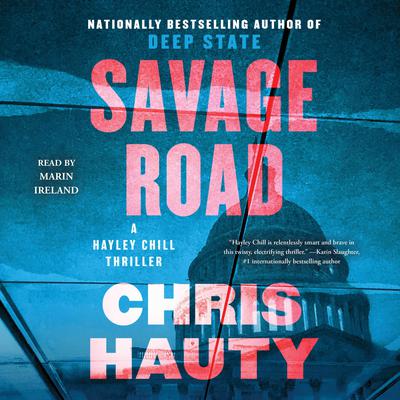 When a series of devastating cyber attacks rock the United States, Hayley Chill is tasked by the “deeper state” to track down their source. NSA analysts insist that Moscow is the culprit, but that accusation brings plenty of complications with Hayley directing the president as a double agent against the Russians. With increasing pressure on the president to steer him towards a devastating war, it’s up to Hayley to stop the mysterious computer hacker and prevent World War III—while also uncovering some shocking truths about her own life.

Magnificently crafted and perfectly timed, Savage Road is an edge-of-your-seat political thriller ideal for our times.

“Savage Road is a rocker of a novel. Whip-smart and propulsive, it dives into geopolitical cyber warfare with twists and turns you won’t see coming. A must read.” —Connor Sullivan, author of Sleeping Bear
“Hayley Chill: a protagonist with so much bite, readers had best wear a flak jacket…Savage Road is a brilliantly plotted thriller with plenty of edge-of-the-seat moments, twists, and turns to satisfy the most ardent of fans.” —Mystery & Suspense Magazine
“Hayley Chill is relentlessly smart and brave in this twisty, electrifying thriller.” —Karin Slaughter, New York Times bestselling author

Chris Hauty is a screenwriter based in Los Angeles and the author of Deep State. His plays produced Off-Off-Broadway included South of American Business and Shut Eye, Big Mouth. Employed for the last thirty years as a screenwriter, he has worked for every major movie studio, in nearly all genres, and in collaboration with Hollywood professionals ranging from Mel Gibson to Jessica Alba, with credits including Never Back Down and Sniper: Homeland Security.