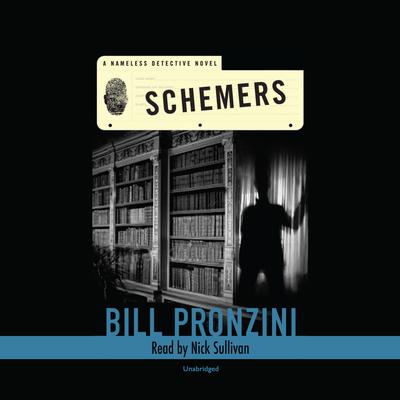 Nameless wasn't supposed to come into the office on Mondays; he wasn't supposed to answer the phone. On this Monday, he did both. The call was from Barney Rivera—once a friend, now despised—at Great Western Insurance. Against his better judgment, Nameless agreed to meet with him. The investigation was relatively simple: a multimillionaire rare books collector had reported the theft of eight volumes, worth a half million dollars. From a locked library. To which he has the only key. The books were all crime fiction and suspense—a locked-room mystery about mysteries. This ordinary Monday brought a second oddball case: The Henderson brothers were being stalked. Someone had dug up the ashes of their late father and poured acid over them, then destroyed the headstone the same way, and left a sign warning that this was just the beginning. Searching for peace of mind and the distraction of work, Jake Runyon is more than happy to bring an end to the brothers' terror.

“The award-winning Pronzini has more than a little fun with the locked-room mystery about missing mysteries, but as usual, the most compelling aspects of the book are the personal backstories of Jake, Nameless, and Tamara. These characters evolve realistically from novel to novel, and readers savor their growth as much as the cases they investigate.” —Booklist
“Any novel by Pronzini is a great read. But the genius of this series is that it is character driven. You like these people and want to read about them. The series deals with dark matters without being dark…Schemers is a great introduction to the work of Bill Pronzini. But a warning: read it and you will want to get your hands on all 34 previous Nameless novels.” —Bookreporter.com