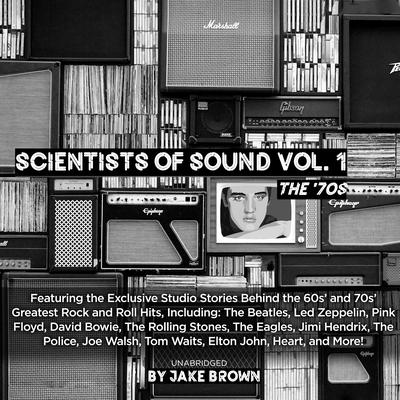 The recording studio has long been referred to as “the lab” in record-producer slang, and the Scientists of Sound for the first time takes rock and roll fans of every genre and generation on a first-of-its-kind behind-the-scenes tour of the record-making process, from analog to the digital era. Many of the most famous hits of all time are chronicled here, including “Start Me Up” by the Rolling Stones, every Eagles hit from “Hotel California” through “Life in the Fastlane,” Joe Walsh’s “Life’s Been Good to Me So Far,” “Comfortably Numb” by Pink Floyd, “Rock and Roll, Hoochie Koo” by Rick Derringer, “Black Dog” and “Rock & Roll” by Led Zeppelin, “Rocket Man” and “Tiny Dancer” by Elton John, “Starman,” “Ziggy Stardust,” and “Changes” by David Bowie, “Magic Man,” “Barracuda,” and “Crazy on You” by Heart, Tom Waits’ entire 70s catalog from “Heart of Saturday Night” through “Heart Attack and Vine,” Aerosmith’s Toys in the Attic LP, and other 70s greatest hits, Jimi Hendrix’s Electric Ladyland LP, and on and on through hundreds more of rock and roll’s most timeless hits!

Giving fans a front-row studio seat as they recount the stories behind the creation of these hits are fifty of the most legendary record producers of all time, including Bob Ezrin, Bones Howe, Jack Douglas, Chris Kimsey, Andy Johns, Bill Szymczyk, Eddie Kramer, Mike Flicker, Ken Scott, and Nigel Grey.